Start a Wiki
This is an article about EQuartz Cleandroids, a character created by Frozen Scorpio on 12/31/2015. 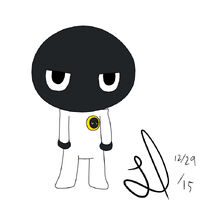 Cleandroids share several common physical traits with one another. These include short height, white bodies, and dark-gray circular hands and heads. Beyond this Cleandroids can have a variety of different designs on them to suit whatever need you program for them. Commonly seen Cleandroids are, obviously, Cleaning units. These often don red bandannas and carry around brooms or dusters much larger than them. A few other variations are Factory Units (ranging from small to XXL sized, they often have furnace hatches on their chests to carry around burning metal/plastic and have larger, more noticeable bolts, screws, and switches on their bodies,) Hunting Units (often wearing camoflage paint and small army suits, while carrying around rifles much larger than them,) and Multipurpose Units (special Cleandroids that are programmable to have several uses, will often change costume to reflect on their current role.) All Cleandroids have a small emblem of their own, each in the same spot and having the same image as the others.

Cleandroids are not really known for having a personality. They often just stare and do their work, with programmable personalities to best suit their owners needs. However, Cleandroids, for whatever reason, can often be seen in large numbers when not working, usually lazing around in certain hideaway spots they secretly build or in closets, and have an almost childlike obsession with games of all kind, both physical and video. Cleandroids, despite their loyal nature from programming, all answer to a higher Cleandroid Unit, the Cleandroid General, meaning that they will often skip work to attend it's moral speeches and exchange data amongst eachother in small conventions every other Fourday (EQuartz-Universe equivalent of a Wednesday.)

When Jared had gained control of EQuartz Industries, his first goal was to fix up the building and the city around it. With lazy, unpaid janitors unwilling to work, he had to turn to using robots to help push this goal. In a corporate move that could've easily ended in financial failure, Jared poured all of EQuartz funds and resources into mass-producing cost-efficient and durable little machines to help clean. This is where the first model of Cleandroid came into use.

Over the years, Cleandroids were updated and upgraded to help better the economic state of Soulstice at the time. These methods included less energy-consumption, anti-burglary functions, smaller sizes, and a limited release of Solar Cleandroids that, as the name implies, ran on solar/heat power through small panels underneath a single layer of metal for skin.

Cleandroids are built to last nearly anything. They are able to withstand heats of over 2000 degrees Fahrenheit and the inverse for freezing temperatures. Cleandroids are built airtight with special sealing adhesive, keeping water and dirt out and making them able to function properly even when under great gravitic force. Built into the backs of their legs are small jets that flip outward and help keep them from blowing away in strong winds. A key feature of Cleandroids are their ability to bind eachother's parts together to form larger, more powerful Cleandroids.

Cleandroids of any model or kind have a pre-programmed and constantly updating knowledge on combat if necessary. This will often include using objects they commonly use for their jobs as weapons, whether being guns, brooms, gavels, anything. Cleandroids battle with more of a pack-mentality, meaning that in small numbers they are generally weak but can be a powerful force when in large groups.

As stated before, Cleandroids do not function well combat-wise in small numbers. Their small size and light bodies can make it a little difficult for one to carry heavy weapons, while lighter ones would not do nearly as much damage. Though they are built to be durable overall, Cleandroids' common weakpoints are their eyes, the softest parts of their bodies. A clean shot in their eyes can easily damage a Cleandroid to points where repairs are either impossible or would be very costly.

Retrieved from "https://sonicfanon.fandom.com/wiki/EQuartz_Cleandroids?oldid=1641761"
Community content is available under CC-BY-SA unless otherwise noted.