E.X.E is a creature of chaos and may take many forms. Though it is frequently shown to slightly resemble Nazo but its Fur is Black instead of Silver and its Eyes are Black with Red Irises, its Mussle is also Gray. it has no Nose however. Its Spikes are also pointing upwards, even the ones on its back. A dark mist commonly surrounds it. It does not wear Gloves or Shoes and it has Gray Claws on its Hands. After the No-Zone Prison E.X.E has worn a Prison Outfit, altering styles based on it's Gender at the time. If it is Male it wears a full Orange Shirt, Sleeves ripped off, with its Orange Trousers. But if it is Female it wears the Orange Shirt like a Tank Top by tying it, Trousers remain the same.

E.X.E is the result of an experiment gone wrong that was conducted by Eggman. When the Doctor attempted to power up a un-named Machine; possibly a robot generator of some type, with the Black Chaos Emerald, an Jem thought to previously be a myth, the Emerald shattered upon use and the machine was destroyed. From the ashes a dark mist rose and it formed into a creature resembling a Hedgehog. It left Eggman's Base without even acknowledging the doctor.

Soon after the entity arrived on Angel Island and began to syphon Chaos energy from the Master Emerald. Knuckles attempted to fight it off but was beaten to a pulp. After taking in enough Chaos energy the creature vanished from Angel Island.

After a Week without any sightings the creature reappeared in Westopolis Park. It began to terrorize the locals until Sonic and Tails showed up. The duo managed to fight the entity off but it was ultimately just toying with them. The entity was soon captured by Zonic the Zone Cop with the help of an alternate universe Mephiles the Dark, in exchange for his freedom from imprisonment. It was then braught back to the No-Zone Prison and studied.

There it was branded as E.X.E by Dr. Zobotnik. E.X.E stands for Emerald Xenomorphic Entity. It was given this Name because its 'Heart' was made of Emerald shards; it had shape-shifting abilities with the ability to copy others, and it had Ectoplasm as its Blood. It was stripped of its Power with a No-Zone shard and thrown in with the other inmates.

Upon the Brutus Pack, the Prison's Alpha Males, meeting E.X.E they mocked it for being "The new weak Boy in Town.". E.X.E then spoke for the 1st time, saying "Hmm... You lot look like fun.", to everyone's shock it had a Female voice. The Brutus Pack instantly lightened up and began to hit on E.X.E. E.X.E used this to her advantage and began to show 'interest' in the Pack's Leader, Guru, a Wolf. E.X.E spent the next few weeks suducing Guru. On the 3rd week E.X.E 'convinced' Guru to get her a Key from the Captain's Office. She told him she had an escape plan.

Upon receiving the Key E.X.E gave Guru his reward; a night in her Cell, but after E.X.E had spent an hour pleasuring Guru she gave him a 'Kiss of Death' and Guru passed away. E.X.E snuck out of her Cell and through the Prison. E.X.E took back her powers from the Shard and then stole a Space Ship to escape.

After arriving back on Earth E.X.E got into a fight with the Mephiles from before. Though she did not prevail. Mephiles brought E.X.E to the brink of death and she had to retreat to regenerate. But everytime E.X.E regenerates it alters Gender. Eventually the Male and Female sides split apart into their own identities. Male E.X.E has become a blood thirsty demon that enjoys haunting others, while Female E.X.E has become a close allie of Eggman, who she sees as a Father.

Eventually... one must stand, and one must fall.

Male: When Male E.X.E is Male, it is cold and ruthless with heavy signs of insanity showing. It seems to lack emotions all together and will never back down from a fight.

Female: When Female E.X.E is still cold and ruthless but does not show any signs of insanity. E.X.E is rather calm and collected as a Female aswell. Though it still seems to lack emotions; as a Female, E.X.E regarda Eggman as a Father.

E.X.E is weak to Silver (Material); due to it's mystical properties, Light based Magic, and Positive Chaos energy.

Life of vengeance, a passive test Until the grave I will rest Engage the pressure until it crumbles The existence of the lifeless black souls. Onward to the sacred battlefield Where justification and limits are revealed Tools of steel in rage they conquer Weed out the killing of victims stalker. The powers proven to end the madness Upon I take it to end the savage The rays of light a truth of meaning To my father the blood is pleading. A justice rage for all to feel With innocent cries and hatred squeals The gore of evil seems to satisfy When slain an maimed and pacified. My chosen torture makes me stronger In a life that craves the hunger A Freedom and a quest for life Until the end the judgment night. Watch the footsteps but never follow If you want to live tomorrow Steal a soul for a second chance But you will never become a man... 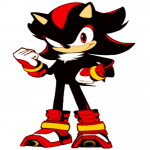