Sonic Fanon Wiki
Register
Don't have an account?
Sign In
Advertisement
in: Characters, Robots, Characters with no gender,
and 7 more 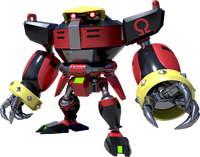 proving himself
Dislikes
Dr. Robotnik and his robots,

his abilities being squandered,

I AM DESIGNATED E-123 OMEGA, BUT YOU MAY REFER TO ME AS "OMEGA" IF BREVITY IS WHAT YOU AIM FOR.

E-123 Omega is a robot created by Dr. Ivo "Eggman" Robotnik. Originally created to guard Shadow the Hedgehog after he fell from the Space Colony ARK, he turned on his creator and joined Shadow and Rouge as part of Team Dark. He continues to pursue vengeance against Robotnik, guarding Team Dark's properties in the meantime.

Originally created by Dr. Robotnik as the penultimate example of his E-Series robots, Omega was originally assigned to guard Shadow the Hedgehog in case the latter escaped stasis. However, there was an unintended effect as he realized that an alliance with Robotnik would be fruitless and only lead to his destruction, so he destroyed a number of robots before Robotnik disabled him. Omega was then locked in storage with Shadow, which angered him and made him swear revenge on the Doctor. However, Rouge the Bat inadvertently came upon the room where they were both sealed, which resulted not only in Shadow's release, but also Omega's reactivation and subsequent attempt to destroy Rouge and Shadow. However, Rouge's motherly disposition won out, and she listened to both of their stories. Omega then joined both of them as part of "Team Dark", and the rest is history.

In comparison to his other teammates, Omega is more reckless in combat, not giving a damn about anything that could potentially injure or kill him. He wants to prove himself as the greatest of all of Robotnik's creations and takes a dim view of other robots. In spite of his lack of emotions, he can understand others' feelings largely thanks to his analogic circuits, and he's actually pretty mellow when not threatened. He also has a tendency to make inadvertent wisecracks.

No changes to Omega's appearance in this universe.

Owing to his size and weight, Omega is very powerful in CQB, able to kill or at least seriously injure an ordinary person with a well-placed blow. He is also a pretty good shot with the myriad of weapons he carries, though not the most accurate shot ever. Using his analogic circuits, he is also skilled at analyzing people's emotions and detecting all but the most skilled liars. Being a robot, Omega is also remarkably resistant to the elements, and his heavy armor protects him from most conventional weaponry. In "She Is, To Him, Everything", he has even been shown to be a good cook, but he usually leaves the cooking to Rouge.

With Shadow and Rouge on a mission, Omega approaches Sonic to obtain a progress report on his quest to get gifts for them. He deems the Blue Blur to be lying, citing the "Noodle Incident". He also admits to getting chocolates for Shadow and Rouge. Later, at the party, Omega is positive that Sonic and Tails will arrive at the party with gifts. He also attempts to stop Mephiles, but is forced to back down when the Dark One threatens Rouge.

She Is, To Him, Everything

Omega cooks breakfast for Rouge because today is International Women's Day. He tells her that it’s been celebrated in the Kingdom of Mobius for 115 years, also getting a hug from her.

Omega goes with Shadow and Rouge to see a movie in Emerald City, deeming The Executioner movies to be tasteless. When they return to Rouge's mansion, Omega expresses concern over Rouge poking her supper with her fork, to which she shows how much she's bothered by the police shooting they witnessed. Nevertheless, he believes that it's of little concern. The next day at breakfast, Omega predicts mass turmoil in the Kingdom of Mobius, and he turns out to be right when Team Dark watches the news later that day, though he elects to remain neutral. On a side note, he also enjoys it when Shadow and Rouge hug.

The next day, Omega guards Rouge's mansion while Shadow goes out for groceries. In the meantime, he has also been giving Rouge progress reports on Shadow's behavior. Speaking of progress reports, Omega expresses concern the next day when Shadow watches an Executioner movie – having not done so in a while – thinking that he might be sliding into his old ways. Later, when Shadow rages at the news, Omega deduces that it's because Lech Montgomery – the prime suspect in a rape case – was let go simply for being a human. That night, Omega catches Shadow attempting to sneak out of the mansion, but he is nevertheless convinced by Shadow's lie of needing to take a walk.

Omega tells Rouge about Shadow's long walk the next day, but nothing further comes of this. Despite his lack of emotion, he is happy to meet Hope and senses no traces of deceit in her despite her being related to Dr. Robotnik. Later, when they watch the news again, Omega assures Rouge that Shadow wasn't responsible for three execution-style murders that happened in Emerald City the previous night. He also shows indifference when Rouge tickles Shadow.

At the next day's breakfast, Omega warns Shadow of the consequences of poor sportsmanship. He also gets a backstage pass for the International Festival of Community from Sonic. Later the next day, he keeps Shadow and Hope company at lunch and tells the story of how Team Dark met. He is, however, unsure of how Dr. Robotnik turned evil. Nevertheless, he predicts a very good probability of Hope having a happy and fulfilling life if she continues to hang around with Shadow and Rouge.

The next day, Omega is unsure why Shadow's reverted to his previous cold behavior. Nevertheless, he decides not to push the issue. The next day, he follows Shadow, Rouge and Hope to Emerald City for the big concert, standing guard outside the Five Guys they go to for supper. After the concert, when he learns of the bomb that Shadow stopped, Omega agrees with Rouge and Hope's questions about who set the bomb and why, but nevertheless defers to Shadow's order not to investigate further.

Omega is unaware of Shadow hitting Hope the next day, nor Rouge's retaliation. He does, however, express concern the day after when Shadow refuses to eat breakfast. Still, he is proud of Rouge being a mommy to Team Dark. In spite of not being able to eat, Omega is well aware that the takeout that Rouge and Hope got later on that day is supposed to be delicious. When Sergeant Stauerbach and Detective Moroder search the mansion for Shadow, Omega stands idly by, not wishing to draw further police attention. The day after, Omega agrees with Shadow's assessment on the name "Team Dark", and joins Rouge and Hope at the Royal Palace to hear Shadow's speech.

Omega – dressed up in his pumpkin costume – attempts to scare Sonic. He inadvertently mashes up Halloween movie quotes, claiming that his pop culture databanks are messed up from a terrible virus that Rouge recently cured him of. He also attempts to get Shadow to point his M60 away from Sonic.

Terror At the Olympic Games

When Sonic and Shadow get into a fight, Omega advises them against it, citing the Olympic Spirit. He also advises them to take Rouge's threat about their Christmas presents seriously. After Sonic leaves, he tells Rouge that alone time would be good for Shadow.