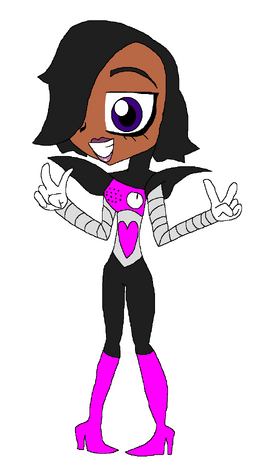 Dynomite is a character created by FlowerOfTheWind. She is a famous popstar from Cosmetica who comes from planet to planet to be popular.

Dynomite is a tall, slender and beautiful woman with dark skin, short black hair with a fringe what covers her left eye and dark violet eyes. She also wears a black suit covered by a pink top with various buttons on it with a grey belt with a pink heart on it. She also has robotic arms with white gloves, along with wearing pink high-heeled boots.

For a long, long time ago, Dynomite was created by an unknown scientist from Cosmetica who created her as to get more and more attention from fans. However, instead of being that evil, Dynomite became a kind and gentle character everybody wanted to have as a roommate.

Dynomite's alternative pose.
Add a photo to this gallery
Retrieved from "https://sonicfanon.fandom.com/wiki/Dynomite?oldid=1798238"
Community content is available under CC-BY-SA unless otherwise noted.