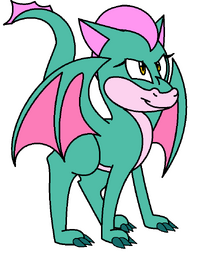 Dulcy the Dragon is a dragon and a member of the Freedom Fighters. While she comes from an island inhabited by dragons, she's one of the few dragons on the mainlands of Gaia.

Dulcy is a dragon with green scales and pink skin acting as a muzzle and underneath her chin going down to the tip of her tail. She also has a pink Mohawk and a bit of pink sticking out on her tail. She has golden eyes.

Dulcy was born to Sabina the Dragon on Dragon Island, but was orphaned as an egg in Mobotropolis for unknown reasons. She would be taken in by Rosie Woodchuck and would come to believe that she was a mobian like the rest of them.

Like the other children, she ran from Mobotropolis to Knothole during Dr. Eggman's takeover and wouldn't discover her incredible abilities until later on, in which she lent her powers to help the Freedom Fighters.

Dulcy is very sweet and is a child at heart. While she is often clumsy, loud-mouthed, and ditzy, Dulcy is kind, helpful and loyal to her friends. She sometimes becomes disoriented, greatly dislikes tight spaces and often sucks the tip of her tail in her sleep.

As a dragon, Dulcy can fly and glide, charge enemies with her horns and breathe fire. Over time, Dulcy has learned to use other elements including electricity, ice and wind.Despite her size, Dulcy is the most powerful member of the Freedom Fighters to date, but is inexperienced with flying, often leading to crash-landings.

Retrieved from "https://sonicfanon.fandom.com/wiki/Dulcy_the_Dragon/Marshalia13%27s_Universe?oldid=1860638"
Community content is available under CC-BY-SA unless otherwise noted.