Cyra, come. Let’s escape that mad man together. I big bro promise that no one will hurt you ever again. 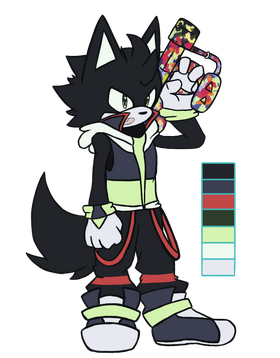 Duke Aethelweard (デューク・エーテルウェアード/De~yūku ēteruu~eādo), also known as Dusk, is a wolf with a love for street art. He left his twisted household alongside his younger sister, Cyra, and since then, he was plunged into the unknown. He’s currently the leader of Team Dusk, and is their speed-type.

Duke is a dark blue wolf with a light grey muzzle and green eyes. He has very light green (which are nearer to white than green) inner ears, and light green scleras. He also has two tufts of fur curving and pointing to the back of his head, resembling a ‘swept back’ hairstyle. Duke, unlike most wolves in general, has a more bushy tail than a slimmer one.

He wears a detachable collar, a sleeveless hoodie, gloves, baggy strap pants (it’s literally what it’s called I’m serious), and shoes. His collar is mainly purple with a red outline. Duke’s hoodie has again, a very light green hood, and is colored in purple and light green. In the middle of his hoodie is light green fabric, sewed by Cyra (his younger sister) when it got ripped in two. His gloves’ cuffs are light green with a purple stripe separating it, and the rest are light grey with a light green arrow on the back of his hands. His pants are dark blue with a red stripe and red ‘straps’ on each side. Lastly, his shoes are purple with a green strap and light grey sole.

Duke was born in a dysfunctional family alongside his sister, Cyra. After his father parted ways with his mother, he decided to stay with his father, thinking that the old man needed mental support. Cyra agreed to this, but both siblings ended up having to endure constant abuse. Because of this, Dusk couldn’t stand his father hurting his little sister, and so swore to protect Cyra from his father. After that, he began to become rebellious, frequently escaping his home and roaming the streets. In one of his escapes he saw a street artist, leaving for their home. He saw their art on the wall, and that artwork encouraged him to draw to express his emotions. From there, his interest in art sparked. Over the weeks he became indulged in street art, but he had to let it cease when matters got worse at home. In Duke & Cyra's attempt to escape, Cyra fell into a coma, his father went to jail, and his mother came back to help her children. Duke found himself leaving Cyra in his mother's care, and from then on, he was whisked on an adventure. Unbeknownst to him, Duke was going to be involved with something much bigger than he anticipated.

“Ah, how do I begin, Cy. I miss having you around. Good news, dad’s in jail, and mom’s helping you! I’m sorry I couldn’t get to you in time when dad sent you into this state. I’m sorry for not being strong enough. We should have left, Cyra! We should have listened to mom! But, I don’t wanna leave dad, as much of an emotional ass he is. He needs our help - he’s taken the wrong path. Still, though, sorry I made the decision to stay with that jerkface. If we were with mom, you wouldn’t be in a coma for such a long time. I know you’ll wake up one day, but I kinda want that day to be now. ” - Duke to Cyra, who was in a coma.

“Told ya Rae-Rae. I’ll support you no matter what.” - Duke to Shirae

1st design
Add a photo to this gallery
Retrieved from "https://sonicfanon.fandom.com/wiki/Duke?oldid=1870583"
Community content is available under CC-BY-SA unless otherwise noted.