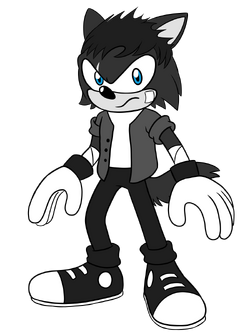 Drew is a 17 year old black wolf. He has a bandage on his left cheek from a deep cut as well as white tape on his right arm wrapped from his wrist to his elbow. He wears a black dress shirt, unbuttoned, with the sleeves rolled up with a white t-shirt under it. His pants are black and his sneakers are white and black (they look like Converse). He has white gloves with black wristbands, one on each wrist. He has a black faux hawk haircut. He has many scars and bandages on his face, arms, and legs. He has the simple bandage on his cheek. This is the most frequent spot being injured as well as his right arm.

Drew is serious and caring. He is usually referred to as the tough guy, however. He is an underground fighter so he has a tough attitude. He will stand up for his friends and any innocent bystander. He tries his absolute hardest to avenge his father's death. He has a cold attitude towards anyone that disrespects his family as well as his friends. He takes all of his fight seriously and will focus his hardest on his match. When he wins, he will congratulate his opponent on fighting his best. When he loses, he will thank his opponent for helping him get stronger. He doesn't pout or have a fit over his loses. He turns them into his strengths for his next fight. However, Drew refuses to fight any woman. He frowns upon anyone that does. Drew has forfeited many fights because of this. Drew believes that men should not ever strike or forcefully touch a girl. Drew also has a dark side to him. When he is pushed to his breaking point, he will try and kill all opponents nearby. This side is shown when either a friend has died, or he is near death.

Drew was born to a family of martial arts. His mother was a professional kickboxer. She taught him his lower body fighting skills and his swiftness and agility. His father was a skilled martial artist trained primarily in jujitsu and karate. He gets his endurance and strength from his father. When he was 8, he began to learn all of the things his parents would teach him. His mother died of cancer when he was 13. that was when he began his fighting career. He entered himself into a secret fight club at his middle school hosted by multiple corrupted teachers that were paid to supervise and stand guard. Drew didn't win much until his father taught him jujitsu. This helped him win, earning enough money to pay for his rent with his father. Drew's father earned money by fighting as well. He was unaware of Drew's illegal fighting. On Drew's 16th birthday, Drew's father had won a tournament against another martial artist master. He was very dishonest, disrespectful, and fought dirty. He then killed Drew's father after the tournament. Drew saw the man who was later revealed to be Exodus, an infamous planet destroyer and murderer. Drew, now 17, vows to avenge his father's wrongful death.

Recently, Drew opened up a dojo in Stoneview City. It is co-owned with Rapid the Hedgehog.

THIS SECTION IS STILL UNDER CONSTRUCTION

Drew is highly skilled in martial arts. He practices daily. He has simple yet effective skills.

Drew has his flaws like most people. His left arm is less strong than his right. In his rage form, he cannot move as fast as he could.

Retrieved from "https://sonicfanon.fandom.com/wiki/Drew_the_Wolf?oldid=1845574"
Community content is available under CC-BY-SA unless otherwise noted.