Captain Ironclaw, not getting what she wants, losing, failures

"Ladies and gentlemen. As I recall, there was people yelling, yelling for the greatest pirate of all. But not enough to make the blood ice by simply naming. So why wouldn't sailors fear the pirate those lust would freeze the blood even more? I once decapitated an entire village and had their blood, painted across this ship's floor. And for instance, I enjoy feeling the pain and pain makes me stronger and more intimidating on the seas"
—Dreaded Dory's speech

Dreaded Dory is a pirate appearing in Pirate Adventures: The blood ship as the main antagonist. She is the archenemy of Captain Ironclaw (an ancestor of Cyo the Lion).

She is the captain of the ship nicknamed The Blood ship.

She is a purple mobian cat almost similar to Blaze in appearance save for different head shape, dark lavender fur, grayish skin and black tail tuft. She wears a purple coat with a belt and sword sheath, red belt, black pants and blood-red boots.

She also keep her hair in a pony tail.

She is one of the most ruthless and malicious pirates at the mobian seas and is famously known for her blood lust. She has her crew paint the decks of her ship with the blood of their victims or even bathe in blood. She is also very narcissistic and selfish, caring little about her crew's well-being and survival.

Dory also is very cunning and clever as she plans her attacks on ships or at villages at some certain time and when to strike.

She also seems to have a grudge against Captain Ironclaw.

She first appears in the first chapter of Pirate Adventures: The Blood ship at the end of the chapter, swearing to face Captain Ironclaw.

In the second chapter, she and her crew kidnapped several townspeople of Apotos and killed them all but four of them who willingly joined her crew to have their lifes spared. Here it is shown that she collects the blood from her victims in buckets and had her crew to throw the bodies into the sea to feed the sharks.

As mentioned by Captain Ironclaw, she is the one responsible for the loss of his left eye. 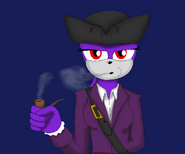 Dreaded Dory angry at one of her crew-mates.
Add a photo to this gallery
Retrieved from "https://sonicfanon.fandom.com/wiki/Dreaded_Dory?oldid=1847168"
Community content is available under CC-BY-SA unless otherwise noted.