" You might have the powers of a god, doesn't make any closer to being one"

-Drake, preparing to fight Maxwell and his ultimate machine. 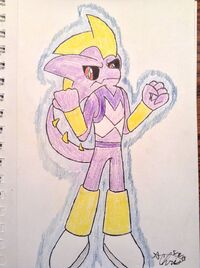 Drake is a 16-year-old dragon with the powers of fire and the self-appointed protector of the Elemental Gemstones (His world's version of the Chaos Emeralds). He currently lives in Coastal Isle Resort. Before the isle was turned into a resort, Drake lived on the islands alone. Right on his 14th birthday, Maxwell manged to take the Aqua Sapphire and caused the islands to lose energy. Seeing this Drake followed Maxwell and saw the he was planning on draining his world's energy through the Elemental Gemstones. This kicks-off Drake's next 2-years of fighting Maxwell to keep the planet from dying.

Drake has yellow spikes in the form of a mohawk and two spikes on both sides of his head. He usually wears a red scarf with a sleeve-less dark purple and white vest. Drake also wears a pair of white boots that can occasionally have spikes on them to run across ice.

Drake's only true weakness is himself. His powers are extremely uncontrollable. What makes it worst is that most of his powers are connected to his emotions. So if he get super angry, then he goes super nova.

With a combination of punches and kicks, Drake shoots blasts of flames. With this ability comes invulnerability to fire and the power to command it at will.

"Could be better."(D rank phrase)

Retrieved from "https://sonicfanon.fandom.com/wiki/Drake?oldid=1856849"
Community content is available under CC-BY-SA unless otherwise noted.