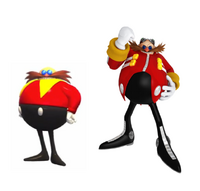 "The Doctor", "Baldy McNosehair" (by Sonic),

"Your Evilness/Foulness/Wickedness/etc" (by Scratch & Grounder),

driving vehicles, PINGAS, giving himself PRRRROMOTIONS
Dislikes
That Hedgehog, seeing one of his grand schemes foiled,

Dr. Ivo Robotnik, also known as "Dr. Eggman", is the main villain in BearfootTruck's Sonic stories. In these stories, he has taken over the Kingdom of Mobius and roboticized most of its citizens. Now, he plans on taking over the rest of the world. Trouble is, there's a little blue hedgehog standing in has way, and he's brought some friends, too. Aside from his mad plot and a few other differences, he's practically identical to the mad genius we all know and love. For other evil plots, go here.

Nobody knows where Dr. Ivo "Eggman" Robotnik came from. A popular rumor has it that he is really a scientist named Julian "Ovi" Kintobor who was injured in a lab accident. While a Dr. Julian Kintobor did exist, there are two major problems with this theory: First of all, Kintobor disappeared three years before Robotnik showed up. Second of all, Kintobor was nowhere near his lab when the accident occurred.

Despite the lack of background references, Dr. Ivo Robotnik was hired when he applied for a job as a military scientist in the Kingdom of Mobius. Here, he made some major breakthroughs, which was particularly fortunate because Mobius was at war with the Roseinian Empire at the time. Robotnik rarely spoke to his fellow employees, and for the most part, they didn't bother him. However, some of them would call him names like "Eggman" or "Egghead". He really hated being called "Egghead", although he rather liked "Eggman", so he chose that nickname for himself.

Little did anyone know, however, that Eggman had something even greater in mind. Then, one day, Mobius signed a peace treaty with the Roseinian Empire, effectively ending the war. This resulted in cutbacks to the Mobian defense industry, and also cause Robotnik to lose his job. Though he was angry, he was also pleased because it gave him the break he'd been looking for. The final piece of the puzzle lay in a shelved invention from Sir Charles T. Hedgehog: The Roboticizer. Created to prolong the life of the elderly, the sick and otherwise infirm, the Roboticizer had a glitch that robbed subjects of their free will and made them more violent.

On the flip side, the Roboticizer was perfect for Dr. Robotnik. Together with his nephew Snively, he staged an aggressive coup and took over Mobius. After this, he had most of the Mobians roboticized. Finally, he resumed hostilities with the Roseinian Empire. From here, he seemed poised to take over the world. However, a few years later, he found trouble in the form of a speedy blue hedgehog, and then a two-tailed fox. Despite the creation of a "Super Special Sonic Search and Smash Squad" and a Death Egg, he was unable to stop them, and he got even more than he bargained for when he tried to trick a certain red echidna. However, even with an entire cast of characters going after him and resultant withdrawals from the war against the Roseinians, Robotnik still won't give up...

Like his game counterpart, Robotnik is a cunning, evil person who will stop at nothing to achieve his goals. However, he is even more immature & childish in BearfootTruck's universe, going so far as to chew out his minions over minor faults. His hamminess is meant to be an allusion to his AoStH counterpart.

Robotnik looks the same as he does in other universes. Again, owing to this universe's mix of classic & modern elements, Robotnik could look like his classic or modern self.

Owing to his high IQ, Robotnik has the ability to create an astounding variety of machines, weapons & vehicles. His aptitude is such that he is able to violate the laws of physics, gravity, copyright, by, in, out and any other laws in order to conjure whatever evil doomsday plot he's using for a story. Despite all that, he is sorely lacking in the ability to defeat Sonic & friends.

As mentioned earlier, Robotnik has a wide variety of machines & weapons at his disposal. However, his most famous creation is the Eggmobile, a spherical open-topped hovercraft which can have a variety of weapons & gadgets attached to it. Although Sonic has broken many of Robotnik's devices, he has never broken the Eggmobile

Dr. Robotnik is constructing a new mech factory in Eggopolis in order to produce a more advanced variety of mech. First, he sends out Scratch & Grounder to capture Sonic, Tails & Knuckles, who inadvertently get teleported to Stalag 13. While he fails to capture them, he does capture Sally, Bunnie, Antoine & Rotor. Robotnik tortures them to extract the info he needs, but a freak electromagnetic storm is making his equipment malfunction, so he sends them to the brig for now.

Unbeknownst to him, they also end up teleporting to Stalag 13. When he finds out the prisoners are missing, Robotnik initiates a no-holds-barred search for them. When the search turns out to be unsuccessful, he decides to take part in the search himself. Eventually, he locates them at the mech factory, but by then, it’s too late: Sonic & friends have destroyed it.

With his mech factory destroyed, Robotnik is sitting in the Great Forest, loathing his failure. After a chance meeting with Cream, he gets another idea for a plan. Back at his headquarters, Eggman announces his intent to steal the Sol Emeralds again. However, this time, he's constructed a new machine: an Inter-Dimensional Molecular Relocation Device. The device is supposed to teleport the Sol Emeralds over to their dimension. However, on its first run, the machine breaks down when only two Emeralds are stolen. Even so, the theft is large enough to attract the attention of Blaze the Cat. Unbeknownst to Robotnik, Sonic is also warped back in time and replaced with two impostors. At some point in this altered timeline, it is hinted that Eggman is murdered by Snively.

When Blaze the Cat attempts to get the Sol Emeralds back, Robotnik captures her and is about to roboticize her when Knuckles & Silver arrive and free her. In the process, the IDMRD is destroyed, prompting Eggman to send a patrol to the Great Forest. However, the patrol force is defeated by Sonic (actually Harry Potter Obama). Enraged, he sends a much larger force of stealthbots to wipe out the Freedom Fighters. However, the force is wiped out by the combined efforts of Amy, Blaze & Sonic (who has returned from a trip through time & space). Once again, Robotnik is very angry.

Robotnik is especially angry at the start of this story, not just because his previous plot was foiled, but because he's had to recall a few of his forces from elsewhere in Mobius to defend Eggopolis. To complicate matters further, he has a new doomsday weapon in the works: The Atomic Decoupler, a weapon capable of destroying entire planets. To assist in his plan, Eggman attempts to deploy one of his E-Series robots by using a slot machine a la Sonic X, but the machine malfunctions and his cards are burnt up.

However, that's not enough to dissuade him from carrying out Operation: Nightshade, another one of his plans to stop Sonic. Robotnik sends out a phony distress signal to lure Sonic, and then deploys a bunch of spikes coated with a poison called sodium barboxide. Sonic ends up stepping on a spike and soon falls into a deep sleep, where he ends up having a bunch of nightmares. Convinced of his success, Robotnik gives himself a PRRRROMOTION. Unfortunately for him, Espio the Chameleon has been spying on him, leading the Freedom Fighters to learn of the Atomic Decoupler. Once Sonic wakes up, they go to work. Eggman tries to stop Amy from smashing the control panel, but in the end, his plot is foiled yet again.

Seemingly at the end of his rope, Robotnik learns that his troop levels are returning to normal. He also gets another idea when he catches Scratch & Grounder watching a TV show called Super Changin' Muscle Rangers (a knockoff of Mighty Morphin' Power Rangers). To this end, he has the stars of the show kidnapped and demands a ransom of 500 million Mobiums from the show's producers. However, Robotnik has no intent to release the hostages. Instead, he's going to force them to star in a few Muscle Rangers episodes that he wrote, roboticize them when he’s finished and take over the world with special robots that he modeled after the show's villains. Unfortunately, Sonic & co. know all about the kidnapping, so they battle Robotnik to rescue the hostages. Despite having a new version of the Death Egg Robot on his side, he gets his butt kicked yet again.

One day, Sonic visits Robotnik's lair with a peace offering. He thinks it's eggs, but the gift turns out to be hotcakes instead. He gets angry and tries to kill Sonic, but fails. For the next couple of days, Sonic's friends try giving Eggman hotcakes, and every time, he gets mad at them and gives the hotcakes to Snively instead. However, when he attempts to kill Cream, Shadow rescues her and destroys part of Eggman's base.

Sonic, now a student at Daniel Griffith High School in Station Square, suspects that Robotnik is hiding behind the identity of "Mr. Tobor", a new science teacher at the school. However, Sonic's theory may not be correct because Mr. Tobor demonstrates a lack of scientific knowledge, giving incorrect explanations as to how a paper maché volcano and a lemon-powered clock work. Furthermore, he gives a demonstration on how to turn a candy bar into a paper airplane, a project with dubious scientific value.

However, when Mr. Tobor seemingly disappears after school, Sonic gets suspicious. Furthermore, with the theft of the Quantum Transcalculator XP-6400, Sonic's hypothesis seems to have weight. After creating a distraction and finding a secret passage, Team Sonic discovers that Mr. Tobor is really Robotnik, who has built a secret underground lab underneath the school and is now using the Quantum Transcalculator XP-6400 to construct a Super Battery, an advanced variant of the Flying Battery.

Once again, Robotnik engages Sonic in battle, using a modified version of the Big Arm. Robotnik seems to have the upper hand, being that the modified Eggmobile now has special armor. Finally, he grabs Sonic, but when it looks like the Blue Blur is doomed, he pours vinegar into the Eggmobile's Lava Missile launcher, sabotaging the machine. Robotnik, having been defeated, escapes.

Retrieved from "https://sonicfanon.fandom.com/wiki/Dr._Robotnik_(BearfootTruck%27s_Universe)?oldid=1374457"
Community content is available under CC-BY-SA unless otherwise noted.