Dr. Janice Scavenger is a scientist condor who turns people and creatures into robot-mutant hybrids. She despises Erica Sakura with a passion, and isn't above trying to destroy her to accomplish her goals. 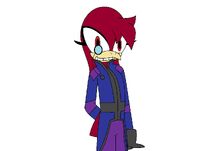 Janice, as a young girl, always wanted to be a scientist. Her main goal as a scientist was to create mutations/robotic enhancements that could improve the lives of the people and creatures around her. She became obsessed with her work, and eventually used her experiments for her own gain. As she slowly went insane, she would use her creations to try to get what she wanted, when she wanted it.

After Erica Sakura found out about Dr. Scavenger's society of robotic mutants, she tried to free some of the test subjects that were captured for experimentation, and appropriately became Dr. Scavenger's nemesis.

Dr. Scavenger is manipulative, cunning, cruel, and ruthless. At the same time, she will show a slightly softer side if the situation calls (and it rarely does). She's obsessive and insane. She can be comedic from time to time, and is quite idiodic and clumsy when she is.

Dr. Scavenger's feathers are maroon, and her eyes are red. Her outfit is dark blue, black, and purple, with purple pants and black shoes. She wears a monocle.

Throughout her life, Janice has created many robo-mutant minions. These are her major minions.:

Sheldon is robo-mutant oyster. He uses metal-infused pearls as ammuntion, and can attack by clamping down on enemies. He is voiced by Ikue Ohtani in Japanese and Lisa Ortiz in English.

Veronica Vulture is a robo-mutant vulture. She is the most common enemy in the games, and she simply divebombs enemies. She is voiced by Akeno Watanabe in Japanese and Rob Paulsen in English.

Gogo in Japan is a robo-mutant gorilla. He uses a lance that resembles a banana. He is voiced by Kappei Yamaguchi in Japanese and Lee Tockar in English.

Bruno is a robo-mutant bulldog. She charges into enemies head-first, and sometimes has a drill bit on her tail. She is voiced by Romi Park in Japanese and Cree Summer in English. 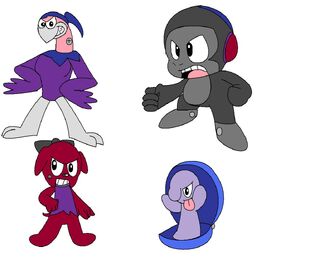 Dr. Scavenger is voiced by Kujira in Japanese and Jaleel White in English. Here are some things she would say.:

"Where is my Robo-Mutagen Contraption!?"

Retrieved from "https://sonicfanon.fandom.com/wiki/Dr._Janice_Scavenger?oldid=1513934"
Community content is available under CC-BY-SA unless otherwise noted.