Dr. Eggman is a scientist and inventor, as well as the arch-enemy of Sonic the Hedgehog with a self-proclaimed IQ of 300, and dreams of taking over the world with his Eggman Empire. Sometime prior to Sonic Fanfiction, he became Joseph T. Marley's partner in business. 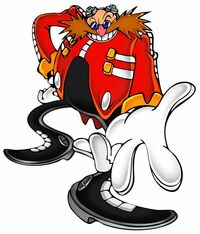 When his plans succeed

When his plans fail

As a child, Eggman, known then as Ivo Robotnik, looked up to his grandfather, believing him to be a hero, seeing him as a great man who had been doing his best to help mankind. Wanting to be thought of as a hero as well, he pursued degrees in both science and teaching.

Robotnik was originally  a kindly scientist who had lived on Earth, but somehow ended up on Mobius, though how he got there was unknown. He intended to make Mobius a paradise, by destroying the negative energy it harnessed, by collecting six Chaos Emeralds, and storing them in a capsule, which stabilized their energy.

Not long after, he had met three young, brown hedgehogs, Sonic , Sonia and Manic , who also happened to be the children of the ruler of Mobius, Queen Aleena. They had stumbled upon his lab in search of their mother, who had been reported to go missing the day before. They had befriended each other quickly, and he had intended to make inventions that would improve their abilities.

Sonic had been given super sneakers that allowed him to go at the speed of sound. However, while testing it, power had fused with the Chaos Emeralds, and a rotten egg in a nearby fridge. Sonic had gone so fast, that not only did he break the sound barrier, but he had also turned himself blue, while Manic turned green, and Sonia turned an eggplant color, and from that same explosion, Robotnik's DNA had merged with the rotten egg, turning him into the infamous Dr. Eggman.

Dr. Eggman does not formally appear, but is mentioned several times throughout Chapter 4.

So far, Eggman shows no known differences from his canon counterpart. If he does have any, they have yet to be shown.

Eggman is a mastermind scientist, with mechanical skills rivaling only those of Miles "Tails" Prower.

Despite his obesity, he seems to have above-average strength. He is also somewhat athletic, being able to outrun Sonic if he is at a far enough distance.

Retrieved from "https://sonicfanon.fandom.com/wiki/Dr._Eggman_(IncaIceBunny%27s_Universe)?oldid=1838143"
Community content is available under CC-BY-SA unless otherwise noted.