Mr. Tinker is an alternate identity taken on by Dr. Eggman when he lost his memory. In the IDW Sonic the Hedgehog comics, this is a result of the events of 2017's Sonic Forces. In The Legend of Fox the Brave, this is because of his defeat in the Battle of the Canyon during the Great War. As of A Grand Return, Mr. Tinker is no more, as Eggman has regained his memories. 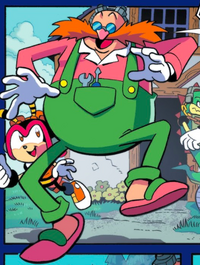 Mr. Tinker retains his appearance from the IDW Sonic the Hedgehog comics.

Mr. Tinker retains his personality from the IDW Sonic the Hedgehog comics. Unlike the insane, evil, megalomaniacal Dr. Eggman, Mr. Tinker is kind, friendly, and eager to help. He is noted to be the complete opposite of Eggman, as he was friendly and polite to everyone he met, but he cowered from fights.

The Final Battle: After the Battle of the Canyon, Eggman was found in the ruins of the Egg Fleet when the warriors look through them. The warriors were initially wary, but quickly realized that this Eggman didn't remember a thing, and they took him in. He remained with them under the name Mr. Tinker.

Shattered Peace: Though he does not appear, Mr. Tinker is mentioned briefly when it is said the warriors created a lie that he was in Ocean Point Village, in an effort to keep Dr. Starline from finding him

On the Run: Mr. Tinker doesn't appear until late into the story. Though not shown, Mr. Tinker bonded with Max and helped him cope with his trauma. When it is decided to hide Max in Light Mobius, Mr. Tinker goes with him, and the two are accompanied by Cody the Wolfdog and Riza the Charizard. However, they are sold out by Duke Smith, and both Mr. Tinker and Max are kidnapped by Dr. Starline. He is last seen in the Final Egg lab, restrained on a table. This is his last appearance.

Though he lacks the genius-level intellect of Dr. Eggman, Mr. Tinker is still a very inventive person. He will happily make robots to serve various purposes.

Mr. Tinker is not a fighting person. Whenever a conflict breaks out, he will cower in fear, much like Max.

Though not shown in the stories, Mr. Tinker became friends with Max, helping him cope with his trauma and to calm down.

Retrieved from "https://sonicfanon.fandom.com/wiki/Dr._Eggman_(Burpy%27s_Dream)/Mr._Tinker?oldid=1855775"
Community content is available under CC-BY-SA unless otherwise noted.