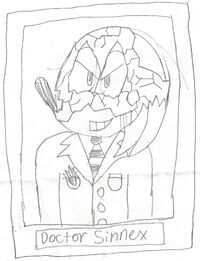 Dr.Sinnex is a purple hedgehog with yellow eyes. He wears an echidna's skull as a mask. He wears a black and white striped suit with silken white gloves. His hair is gelled back into echidna style locks. For some reason he always has garrote wire in his suit pocket but almost never uses it.

Sinnex talks in a very sleek, suave and refined gentlemanly manner, except when he is angry. Sinnex has a god complex and is self centered. He is absolutely fascinated with death and acient echidna culture. Sinnex has no empathy for anyone except his deceased wife, which allows himself to do inhumane and horrible things to people. Such as covering a city in gasoline from his airship and lighting it on fire for amusement.

Most of Sinnex's files on his youth and domestic life have been hunted down and destroyed by Sinnex for unknown reasons. He has a massive airship designed after angel island. In an experiment to create angels and demons he kidnapped two mobians and transformed them into his lackeys Epimethius and Prometheus. Epimetheus was modeled after a angel and Prometheus was modeled after a Demon. Sinnex's goal in life is to somehow become a god.

Fake Reflection: Sinnex makes 6 mirror images of himself and only one is the real one, attacking the real one makes the fake ones disappear.

Mirror Image: Sinnex can spawn mirrors. They can be used to disorient opponents or for temporary shielding.

Necro Breath: Sinnex can breath life into a dead corpse for a very limited amount of time. This is very draining on his power and the corpse simply comes back as a vengeful zombie.

Magic Misile: The classic. He manifests a bolt of magic energy for a ranged attack.

Light Break: Sinnex can summon hands and or swords out of a magic portal on the ground.

Sinnex is skilled in fencing and is armed with his trusty rapier. Sinnex seems to know many magic tricks that have their origins in children's magic shows. Sinnex is very knowledgeable about acient spells and curces and can easily identify them.

Combat Strategy: Sinnex is not that physically strong but that wont stop him from initiating fights. If you want him to be angry at you, mention his wife. With brute strength alone you can overpower him, but out thinking him is much more rewarding. Don't be fooled by Sinnex's words, he is actualy quite frail and will retreat when he knows he has lost. Don't get caught up in Sinnex's tricks. Melee is a high damager but be aware of his skill in swordfighting. When using ranged weapons Sinnex will repeatedly try to dodge roll, be accurate and time your shots well.
Retrieved from "https://sonicfanon.fandom.com/wiki/Doctor_Sinnex?oldid=1670462"
Community content is available under CC-BY-SA unless otherwise noted.