Doctor Jay is a Sonic Fan Character created by Jazzy. He was recently moved from the SFWC wiki along with Nile the Cat. 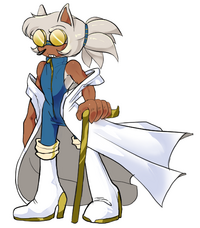 "Idiots! You don't know who you're messing with!" - Jay yelling at a swarm of police who tried to shoot at him and his robots.

"If you work with me.. You're disappearing. You're basically selling me your soul for money." - Jay before recruiting Judd.

Doctor Jay is an off-white muscular-built hedgehog. He wears his quills tied back tightly, and sports a pair of yellow goggles. He is often seen with a golden cane, due to his leg injury, but is capable of balancing well on his legs. He has a long, white labcoat that he lets droop below his shoulders, and a deep-blue jumpsuit. He has long white high-heeled boots to finish this odd look. He has a strange yet attractive accent, one that's hard to determine in the present.

Doctor Jay comes from the future. Before he had decided to become a villain, he was famous in this future for being a rapper and RnB singer. Being known all over his country, he had a great reputation with his best friend, who normally was almost always with him. They got into a car crash, killing his friend and horribly injuring his leg. After losing his best friend and being incapable to get over the trauma, he had began to start horrible habits. (Drugs, alcohol, etc.) Which he was caught doing. His life basically became ruined afterward, people spreading rumors, he became homeless and turned to a life of crime.

Jay is now barely sane, continuing his habits and working hard to bring his best friend back. He had figured since he couldn't stop the car from crashing; He simply had to travel deep into the past to retrieve Nile the Cat 's Regalia Emeralds. Finding the hydrokinetic catwoman was no longer in her tomb, along with her emeralds, he travelled to various timezones, eventually locating her in the present. He now constantly tries to hunt her down, stealing her sometimes, but failing each mission due to the help of her friends. After his first try, Jay realized that with his injury, things could be much harder than they seem, and he had recruited Judd the Cat , who is now his assistant and homosexual lover.

Jay can be calm and have a silent seductive voice, but is often high or drunk, and when he's having his bad moments, he usually stutters and yells angrily. He bottles up his emotions a lot, and forces himself to seem happy yet he is obviously ticking. He is capable of acting relaxed in the right situations, and is a very critical thinker. If you say something wrong, he normally corrects you with an angry tone. He usually only acts sweet and caring toward Judd. Though, he has acted nice toward children multiple times. You can sometimes find him talking to himself when he's alone, or when he's thinking. He can act somewhat aggressive when he isn't calm, normally doing harsh actions like grabbing you by your collar. Jay is always working on something.

===
Judd the Cat (boyfriend) === Jay needed better assistance, so what was better than going onto the anonymously hidden internet and recruiting a hacker? He did exactly this. Judd found Jay to be oddly strange when they first met, considering how he was unprofessional and was even smoking while Judd was there, but he wanted to leave behind his boring life and he was in need of money, so he ended up staying with the crazy Doctor. After a while of helping the doctor, they became close, and eventually fell in love. Judd sees Jay as a sweet man, despite how he acts toward others, and even tries to justify what he does to other people. Jay often babies Judd, teases him, but obviously shows care for the cat.

Michael was possibly the reason Jay decided to become a rapper and singer. Always hyping up his talents, Michael was a sweet man, always giving stuff out and even helping homeless people off the streets. Michael rose into stardom with Jay, as Jay often pulled him into his celebrity life. Michael died in a car accident.

Doctor Eggman and Doctor Jay first encountered when they both found Nile with Sonic and the gang. They eventually teamed up, but went against each other afterward. Doctor Jay oddly seems to be the more violent one of the two, constantly yelling threats at the other, but at other times, they are friendly and praise each other for their smarts. Odd. They both seem to want the Emeralds for two different things.

Jay is constantly busy. He is a very quick and critical thinker, and is the one who created his own secret base, his own ship, and his own robots, without any help. He is even seen hacking into Eggman's computers and robots to throw him off track on Nile's Emeralds, Eggman trying to blow back at him afterward. This fails, and Eggman is blasted into the sky with a gun. In his first appearance when robbing an electronic's store for supplies, he is seen using future technology and the police shooting at him were unsure of what to do while their bullets flew back at them. Jay is not very fast due to his leg injury, but has used a levitation device in his boots to try and run from anything he fails at doing.

Doctor Jay has destroyed one of Eggman's robots with a few punches. He works out often to keep himself in shape, and shows confidence in fights with others. Him and Knuckles could possibly fight and have a tie, if it weren't for his damaged leg. Jay has been seen using his strength to punch through obsticales and buildings, and he lifts heavy supplies over his shoulder with ease. This could be his second most casually used ability, as he uses it in almost everything, including his work.

Retrieved from "https://sonicfanon.fandom.com/wiki/Doctor_Jay_the_Hedgehog?oldid=1780045"
Community content is available under CC-BY-SA unless otherwise noted.