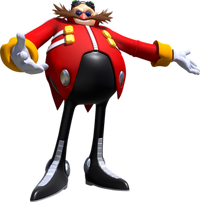 Doctor Ivo Robotnik, more commonly known as Dr. Eggman, is a human and Sonic's arch-nemesis. He is a mad scientist with an IQ of 300 and dreams of conquering Gaia under the Eggman Empire, but his plans are often thwarted by Sonic and his friends.

Generally, Dr. Eggman is round in appearance. He has a dome-shaped and bald head,a pinkish nose, and a bushy mahogany mustache. He also has blue eyes, but they aren't generally seen because of his glasses.

Not much is known about Dr. Eggman's early life, but was said to have admired his grandfather, Gerald Robotnik, who was a great scientist and would follow in his footsteps. At some point, however, he became obsessed with the idea of taking over the world and began his plans.

At some point, he came to work for G.U.N. as a technical researcher, where he bribed Dr. Julian Snively, his coworker and nephew, into being his chief mechanic. Together, they left G.U.N. and made their way to the Kingdom of Acorn, where they made an alliance with Walter Naugus, the royal wizard to usurp the throne from King Acorn.

Under the lie that G.U.N. was planning an invasion, King Acorn allowed Dr. Eggman full access to the Kingdom of Acorn's resources, which allowed him to set up mines all over the Acorn Archipelago to mine the resources he needed to fuel his robot army in secret. King Acorn soon caught onto the doctor's scheme, Dr. Eggman betrayed both the king and Naugus, banishing them into the Special Zone before taking over Mobotropolis to continue his plans unopposed.

While he was unopposed for some time, this ended when Sonic the Hedgehog first came to fight the doctor and his forces on South Island, which would inspire a group of Freedom Fighters to retake Mobotropolis on Westside Island.

Dr. Eggman is a short-tempered, raucous, pompous,and cruel evil genius who only cares about himself and his creations. He doesn't care who he stabs in the back as long as he achieves his goal. He is the ruthless and megalomaniac leader of the Eggman Empire and has destroyed many live along the way, but has no interest in who he's hurt. Dr. Eggman is a huge supporter of science and technology to the extreme, preferring for the world to be covered by his factories and machines and cares none for Gaia's natural life.

He is very manipulative and is willing to use Mobians, Humans, or even powerful deities in his quest for global takeover, although the latter has often backfired on him multiple times.

Dr. Eggman is a brilliant inventor and mechanic with an IQ of 300 able to create powerful machines of destruction. He is also a skilled pilot and driver, often driving power mechs to attempt and overpower Sonic and his allies. Despite his intelligence, Dr. Eggman's plans often fail because of his own arrogance.

Retrieved from "https://sonicfanon.fandom.com/wiki/Doctor_Ivo_%22Eggman%22_Robotnik/Marshalia13%27s_Universe?oldid=1852114"
Community content is available under CC-BY-SA unless otherwise noted.