Doctor Extractor is a Universal Villain that appears in Claw Saga media, he is more for Comic Relief on SFW.

Doctor Extractor was a Scientist in the Dragoonworks Army who designed Weaponry, when Spike was created, Doctor Extractor left the Army, as they already have the perfect weapon.

Doctor Extractor eventually became widely known as a power villain, through his use of the Freeze-Blaster, then using it to freeze his Victims so that he could use them as Lab rats. He is a major villain in The Claw Saga storyline, after the Third Claw Invasion, although, he fails every time.

Dr. Extractor normally carries a large blaster with him, in which he uses to first freeze his victims, then a second feature which traps them inside, he then releases them into a crate, and sells them on eBay. Dr. Extractor also breathes Nitrogen, in which if his Helmet were to crack, he'd be poisoned by the air (even though there is Nitrogen in the air, to him, its not enough). Dr. Extractor also has other means of freezing him victims, such as his freeze bands (seen in the picture).

Dr. Extractor also has a five Minions who make up the Arctic Squad. they are: Subzero, Crystalline, Flocke, Glacier, and Inuo.

Second in Command of Dr. Extractor's Henchmen, She is a Snow Leopard who has the skills to handle any situation.

A Polar bear and the muscles of the group, nothing is too heavy for him.

A Gyrfalcon with a Feisty attitude, She is the Aerial of the group.

A Vipera Berus, He is a Snake with the stealth of the group.

For Comedy Purposes, Dr. Extractor will freeze people, then kidnap then, and Sell them on eBay for money, so watch out, for you'll never know when he's gonna sell you! (Look out, Behind you!, nah just kidding) Of course, this eBay Craze is exclusive the SFW, as in the Claw Saga Storyline, there was no eBay.

People He has sold on Ebay

Sonic the Hedgehog (Many different RP's)

Kyle the Hedgehog (Sold to Emily)

People he has used as Test Subjects

People he has used for Ransom 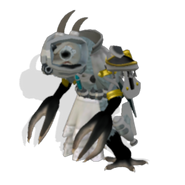 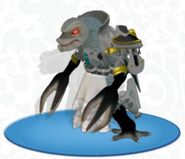 A special Promo picture featuring Doctor Extractor without his helmet
Add a photo to this gallery
Retrieved from "https://sonicfanon.fandom.com/wiki/Doctor_Extractor?oldid=1558880"
Community content is available under CC-BY-SA unless otherwise noted.