View source
This is an article about Divine the Djinn, a character created by Neko Vira on 03/30/2013. 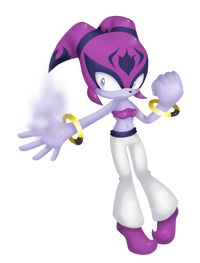 Divine's Skin and eyes are an almost transparent shade of lavender. Over the upper half of her face she wears a Purple And Violet Mask with a Symmetrical Design on it. Around her wrists she wears Gold and black rings which she is unable to touch.

Divine is a sadistic and bitter Djinn who believes that mortals are all after something and are greedy because of this. Ironically, she desires power above all others and relishes having servants of any kind.

Little is known about Divines life before she joined the Cult of Mystics. According to her she was forced to grant wishes the same as all of her kind but she was not released after she granted 1,000 wishes. After being forced to grant many wishes for immortality she grew to hate all mortal beings. When the leader of the Cult of Mystics discovered her he offered her freedom in return for working for him. She agreed, not realizing that she had agreed to work for an immortal being. She continues to work for her new master, awaiting his death.

Divine is a genie and thus can warp all of reality with few limitations. (She is not known for using these powers however.)

Divine can transform anything metaphysical into a flame-like form.

Despite living for over a thousand years, Divine has spent more time granting wishes and brewing over her hatred of mortals for her to have learned much over the years. She is inexperienced in Physical and psychological war-fare. She also might be bad at math.