Dismal the Hedgehog (Inkina za Hejjihoggu) is labeled as a Troll, but he never used to be one; he used to be a regular hedgehog, until he was captured by Rageik's forces.

His real name is actually Daniel.

Dismal is a thin, frail, sickly-looking hedgehog, with scraggly gray fur, and a lighter gray, scruffy muzzle and chest. He is quite underweight (only 56 lbs). The various wounds inflicted upon him never healed properly because of how often the beatings occurred, giving him a slightly deformed look. Both of his ears are over-sized, and the left one has a chunk missing from it, and his tail is permanently broken, bent at a downward angle. From being starved often, his ribs poke out slightly. His eyes are a light, pale blue, and they usually have a haunted, tired look to them (and he usually has bags under his eyes, due to sleep deprivation).

Despite the scruffy appearance of his fur, it actually has a soft and downy texture. However, this is because he has very few of the longer, stiffer guard hairs that most fur-bearing mammals are supposed to have.

Dismal (when he was still "Daniel") had a somewhat rough infancy; when he was born (at Julayla Memorial Hospital, to be exact), his lungs were rather weak, so Dr. Quack had to put him inside of an incubator for a few days. He came out fine (although, being quite perceptive, he was terrified at the experience), and his parents, Sterling and Olivia the Hedgehogs, were allowed to take him home.

Daniel's parent's loved him very much, although they were somewhat concerned at the strange fact that he practically never cried; only when he was frightened or injured. Ironically this did not help his parent's sleep; they would both listen to the baby monitor (or take turns doing so) wanting their son to make SOME kind of noise to let them know he was still alive. Daniel's parents would also take turns checking on him as he slept.

The only thing that really scared Daniel as a child was the doctor's. He was mindlessly afraid of the doctors, panicking and crying whenever he had to go. The only person that he was slightly comfortable around was Dr. Quack himself, but that's most likely because he assisted in Daniel's birth.

Whenever Daniel's parent's did have to take him to the doctor, he would always hide somewhere.

One morning, when Daniel was 3 years old, the Trolls appeared and attacked his parents. Tonic the Hedgehog, under the guise of "Potion", came after Daniel. But then, he was "rescued" by Extreme Coco Larry, I.M Meen the Fallen Pedohog, Miguel the Trollhog and Vic Jackson. They claimed that Potion was a serial killer, and that they were there to protect Daniel.

Dismal lacks the ability to fight and defend himself properly, and his attacks are weak. He is quite fast, however, but not as fast as the other Trolls. His only defense is to curl into a ball and wait for whoever it is menacing him to go away. However, this almost never works; he usually ends up getting kicked like a ball. At least it's near impossible to force him to uncurl; the muscles responsible are almost unnaturally strong. This may be because of the Project Reaper Regenerative flexo-plate in his right arm; the plate grew onto the bone, and it is now "rubber" and mentally controllable.

The flexo-plate in his right arm makes that limb abnormally powerful, and it is theorized that he could shatter bone with a hard-enough punch. It can also stretch to incredible lengths, and is prehensile.

Dismal has poor stamina and a rather fragile body structure, making him vulnerable to even weak attacks. His lack of body fat and an overcoat means that the cold is much more dangerous to him than it is to other Mobian mammals.

He also has very little will to defend himself with the flexo-plate, and thus it is almost never used at all.

Exclusive to the RP Shattered.

Dismal is cowardly and constantly paranoid. Because of this, he never fights, and is too afraid to stand up for himself. He has a paralyzing fear of most of the Trolls (particularly Bubonic, Toxic, Tantrum and Rageik), but at the same time is too afraid to disband from them. He is also terrified of hospitals, needles, doctors, surgery and the like. When confronted with such things, he panics, and usually begins to cry. On rare occasions, he wets himself, and the Trolls take every opportunity to belittle and mock him for this (Tantrum once attempted to put a clamp on Dismal's you-know-what after one accident). He also tends to become childish when afraid, saying things that a little kid would say. Despite the fact that, as a Troll, Dismal has died multiple times, the concept of Death still terrifies him.

Dismal often stutters when he becomes scared. Despite his apparent cowardice, he will become frantic and worried if he sees anyone get hurt. He cannot take too much attention and company; it causes him to become flustered, unhappy and nervous. From being starved on numerous occasions, he has become used to the concept of not eating. He is also notably polite.

Whenever he becomes nervous, he has a habit of taking his tail and "playing" with it (rather, twisting and fiddling it around in his hands). It seems to help calm him down. Dismal is also unusually stubborn; once he gets an idea in his head, it won't go away. For example, if he believes that someone is going to inflict pain or torment on him, he'll go out of his way to avoid that person.

He has enormous self-esteem issues, and frequently belittles and demeans himself whenever he makes a mistake, often hitting himself as well. He is also rather clumsy.

Dismal has recently discovered a sort of third personality (which may possibly be the personality he WOULD grow up with if he never joined the Trolls); whenever he sees someone get hurt (usually a female) he becomes angry, and will lash out at the offender (although he often ends up getting hurt instead). This is still proof that Dismal has chivalrous qualities.

"OMG WHAT IS THAT?! AAAUUUUUGH IT'S GONNA EAT ME!!" - When confronted by a big Pokémon.

Dismeline picture made by Shima. 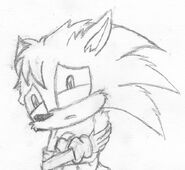 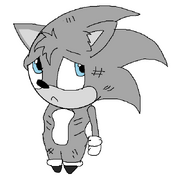 Chibi Dismal made by User:Wh!te$tar

Made by Darklord
Community content is available under CC-BY-SA unless otherwise noted.