View source
This is an article about Disco The HedgeFox, a character created by GalaxyWorld27 on 1/22/2013.

Anyone can be a hero. I'm brave enough to protect my friends from any harm and endangerment.

Disco is a anthropomorphic Hedgefox who was abandoned in a cornfield 3 weeks after he was born and later raise under the care of a farm after he was found by two farmers. After turning 12 years old, he left home to go on adventures and stop any major threats that comes his way. Disco the Hedgefox is a fan character created by Disco the HedgeFox (Known as sonicgalaxy27 on YouTube) 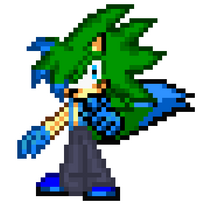 Disco is a hedgefox with Green fur that covers most of his body, peach skin that covers his arms, muzzle and front torso, and Cyan eyes. He has six long quills on the back of his head, two spines protruding from his back behind his shoulders, and a green tail and the tip of his tail is blue. He also has 3 layers of Green/Blue bangs in his forehead.

For attire, Disco wears two light-weight, hyper friction resistant blue sneakers with light blue cuffs around the ankles, light blue soles, and straps across the top, the last of which are held down by a golden buckle on each foot. He also wears a pair of light blue gloves with sock-like cuffs on both hands.

After receiving a new design, some of his attire remain the same but Disco now has nine long quills on the back of his head instead of six, wears a blue sleeveless vest around him. He also wears grey pants.

Disco is a kindhearted and a loyal helpful person with a good attitude. He doesn't joke around with his enemies and always more of a hero type person. (Adding more info soon incoming days)

Nothing is known about his past left but it has been revealed that he was abandoned in a cornfield 3 weeks after he was born. Later, a 33 year old male stranger found him in the cornfield and take him home in the farm house with his wife and they raise him and took care of him. at the age 12 he left home and start to go on adventures. After he met Sonny, both of them build a awesome club house together and start to go on adventures together and hangout.

Sonny The Fox is Disco's best friend as well as his most faithful and loyal friend. Both of them sometimes hangout with each other and they always go on adventures together most of the time and put there lives on the line to save the innocents and the world. However, they get along calmly and they never insult each other once. They sometimes focus on teamwork to destroyed there enemies and creatures.

Disco has a good friendship with Azmaria and He lets her to go on adventures with him and Sonny sometimes. However, Azmaria cares so much about Disco and Sonny deeply. However, she doesn't get irritated with them for their recklessness when they get in tough situations.

Madoka is a friend of Disco witch she helps Disco and Sonny out on strange events that comes towards them mostly. Madoka get along with Disco and Sonny very well but sometimes, she gets irritated with them for their recklessness when they get in trouble in tough situations

Bianca's the Hedgehog is Disco's friend and both of them have a good relationship with each other. They both get along very well and they are in good terms. Bianca sometimes gets irritated with Disco on some events whenever he was in a tough situation.

Disco has a few abilities that he has used. He can used wind punch that can also create a tornado in his hands. If his foes gets hit with them they will spin out of control for a second.

He has the ability and got super speed but he can't run super fast like any other being in the universe but he can run much faster and outrun a motorbike. However, he can't run fast on water and sand.

Despite him reflect random small projectiles in his hands, He can learn close combat and fight his foes in this combat skills that he trained.

He can also turn himself in to a ball and used spin dash, but, he can make himself turn in to a shock ball witch can damage enemies a little bit.

"We can't let you get the Astro Emerald."
—Disco is trying to protect the Astro emeralds from his enemies.

"I love to go on adventures for some reason."
—He is telling Azmaria he loves to go on adventures a lot.
"Madoka catch."
—He throws the radar to Madoka.
"Looks like things just got even darker."
—He tell his friends about a huge army is coming.
"Well Sonny, this is something that we could find out what this door lead us too."
—Disco and Sonny trying to go to the magic door.

1/10
Community content is available under CC-BY-SA unless otherwise noted.
Advertisement