Dimitri is an antagonist from the Sonic the Hedgehog Archie Comics who appears in The Legend of Fox the Brave as the secondary antagonist of Tide of War. He also appears as Enerjak in the story The Hidden Warriors. He is the Grandmaster of the Dark Legion who temporarily aligned the Legion with the Iron Dominion until they were defeated by the Storming Alliance in the Battle of Lamarkie. He then lived as a prisoner of Stalagmite 17 Prison until Shadow of the Storm, when he decides to repent for his ways after hearing of Lien-Da's crimes against the warriors, and becomes an unofficial warrior while helping the Alliance take her and King Shadow down. 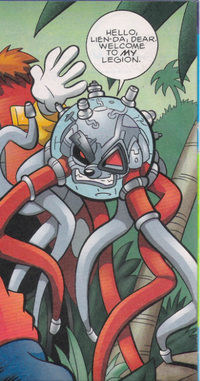 Retrieved from "https://sonicfanon.fandom.com/wiki/Dimitri_(Burpy%27s_Dream)?oldid=1814895"
Community content is available under CC-BY-SA unless otherwise noted.