This is an article about Dillard the Dunnart, a character created by Pumpituppartyzone on 01/2/2013. 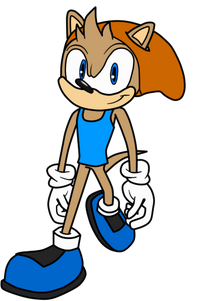 Dillard the Dunnart is a dull brown anthropomorphic dunnart, who enjoys solitude, but appreciates the company of his pet tiger, Ty, even more.

His name was voted on by members of the Sonic Fanon Wiki, the other choices being Ronan and Burnum.

Dillard has tumbleweed colored fur, with a part of it spiked up. He wears a burnt orange beanie on his head that he rarely ever takes off. He has deep blue eyes and a lightly tanned muzzle. He has a long, black nose similar to Sonic's. He wears a sky blue tank top with cerulean shoes that have a black strap on them. Both his gloves and socks are white.

Dillard usually likes to keep to himself. He is used to only having the company of his pet Ty the Tiger, if that. Because he lives in the desert, he does not usually come across people anyway. Because of this, he is very shy and does not like to put himself out there. He is easily emberassed, and is usually uncomfortable unless he is completely alone. He does, however, try to be as kind as possible. He looks after others more than himself, bringing him to put his life at risk to save others if he can.

Because of Dillard's shy and awkward nature, he is especially shy around women. For example, at the end of the  fight against Chaos with Maxie in Maxie Adventure, he started to blush uncontrollably when Maxie stood next to him. Again before the fight against Perfect Chaos, after everybody put their hands in and said "Teamwork," he immediately backed away from Fifi and Maxie, standing about 2 feet from everybody else.

Also as seen in Maxie Adventure, he seems to care a great deal about his friends. When he lost Ty, Dillard was frantic and began running around, looking for means of transportation to find him in. Every time afterwards that he lost Ty, he appeared to tear up a bit, then gather himself and move on looking for him.

Little is known about Dillard's history, as little was revealed in the game. He is from Dust Hill Zone and came to Station Square to have a little change from his normal life. He obviously has a very strong bond with Ty, being devastated when he lost him the first time. He may have a history of technologically advanced people in his family, as he is a natural with controlling Dr. Eggman's robots and machines.

Dillard is very skilled at hunting and gathering, being from the desert. Granted, he is also skilled at being able to find things with an advanced sense of smell. He also has an unexplained skill with understanding and controlling technology. This is seen in Maxie Adventure when Ty is lost. He looks desperately for means of transportation and finds Dr. Eggman's Egg Walker. He instantly knew how to control the vehicle's movement along with its lasers, rockets, and cannons for shooting enemies.

Dillard is also skilled with his tail, being able to use it as a weapon. This is a natural skill for all dunnarts, but Dillard seems especially advanced with it, even changing its thickness with emotions. With his tail, he can preform the Tail Whip. He can also preform a toned-down version of the Spin Jump, only being able to hold the ball position for a second or two. Like all of the Speed Formations in Sonic Heroes, he can preform the Triangle Jump, which is special, as he is not a Speed type.

Dillard is an easy person to trick into doing something. This is mostly because he likes to see the best in people, since he does not know many of them. This is also because he tries to be helpful to people in their time of need. In Maxie Adventure, he was bombarded with people trying to sell things to him. He almost bought all of their things, but he had no money to buy them. When they openly expressed their upset about this, he apologized and told them that if he got the money, he would surely try buy their products.

Though he is usually skilled with fighting, he is very easy to knock onto the ground. This is seen when he asked to buy things from random citizens in Maxie Adventure, he fell down. Another example is when everybody was celebrating the defeat of Perfect Chaos, Max nudged him in a friendly way, which knocked him on the ground. when everybody laughed, he seemed very emberassed. 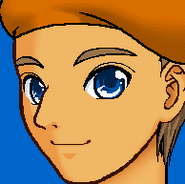 Dillard in anime, made at http://foxrichards.deviantart.com/art/FaceMaker-52755515

Dillard's first sketch on paper
Add a photo to this gallery

"No worries! Here I come!" - What Dillard says when you pick him in Maxie Adventure

"Aww, now where've you gone?" Dillard when he loses Ty other times

Retrieved from "https://sonicfanon.fandom.com/wiki/Dillard_the_Dunnart?oldid=1878323"
Community content is available under CC-BY-SA unless otherwise noted.