Digger the Dog is a young male Dog who is the protagonist of the story A Loner's Tale, and a supporting character in Rise of a Team. He is a youngster hailing from Ocean Point Village, the son and elder child of Ace and Sara, and brother of young Pixie. Following the Lamarkie Standoff, and Tammy's choice to join the Storm Fighters, Digger is now the second-in-command of the LDF. 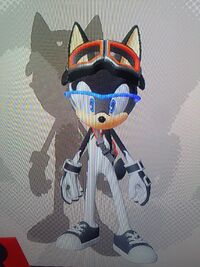 Digger is a laid-back fellow, but he cares deeply for his family. He is close to his sister Pixie, who calls him "Diggy", and loves his father Ace and mother Sara, who love him and Pixie in return. Digger is also good friends with Alex, seeing beyond the fact he is a jackal, and the two heads of the Lamarkie Defense Force, leader Monty the Dog, and his second in command Tammy the Wolf.

'Before the Series': Digger was born in a small town called Ocean Point Village, but an attack from Infinite, barely a day after Sonic's capture, destroyed their home, displacing the inhabitants, who moved into Red Gate City. During the fray, Digger managed to find his sister Pixie, but they were separated from their parents, Ace and Sara. While the Storm Fighters lived outside Red Gate, Digger met and befriended the scarred jackal Alex.

A Loner's Tale: In the Prologue, Digger is living in Ocean Point Village with his family when Infinite attacks, cruelly destroying bbuildinbgs, and even shooting down Digger's friend Markus in front of him. Digger finds and rescues his sister Pixie and finds himself in Infinite's full view. The masked jackal cruelly taunts them, scaring them away. The siblings flee with a group of refugees that head for Red Gate City, and Digger unhappily notices that his parents aren't apart of the group. In the main story, Digger is now living in Red Gate with Pixie. While on a walk by himself, he finds a warrior patrol and speaks with the young jackal apart of it. Afterward, the two become friends and frequently talk to each other. When the Storm Fighters move to a new camp in the Mystic Jungle, Infinite attacks the city, killing the patrol of a young Wolf named Rex, while the Ocean Point refugees flee. Digger scrambled to find his sister, and discovers her hiding in the ruins of their home. He rescues her and they hide for a while until they are discovered by Infinite. The masked villain prepares to kill them both, and as the siblings tremble in fear, they are protected by a dark gray Wolf with gray eyes, who prevents Infinite from launching his attack. The Wolf argues in their defense, and Infinite leaves, warning the Dog siblings that he won't spare them next time. Digger clears his throat and thanks the Wolf, who introduces himself as Stan. He advises them on what to do to remain hidden from Infinite, occasionally coming over to visit them. One day, Stan warns them of Infinite's impending search through the city, telling them that if they were seen, they would be killed. Frightened, the pair run away. They find a way to Hedgehog Village, which is blocked out of fear of Eggman's new enforcer Infinite, and Digger leaves Pixie in the care of Team Sonic so he can search for their parents.

Digger is very agile, able to duck with surprising dexterity. He can run fast and leap high, though he often doesn't unless in a fight.

Digger cares deeply for his family, and is willing to put himself at risk for them. This also appiles to his good friends Tammy the Wolf, Monty the Dog, and Alex the Jackal.

Pixie is Digger's younger sister. She calls him "Diggy", and he affectionately calls her "Pix" in return. Diggyer cares very deeply for her, and loves his sister.

Ace and Sara are Digger's parents, and they love their children dearly. They were separated during Infinite's attack on Ocean Point Village, but Digger has taken it upon himself to find them, though he's taken some time to help the Lamarkie Defense Force.

In the wake of his childhood friend Markus' supposed death during the attack on Ocean Point, Digger found solace in befriending Alex.

Markus is Digger's childhood friend, and helped him watch over Pixie in Ocean Point Village. He was shot down during the attack on Ocean Point, and badly hurt. His fate will be revealed in Rise of a Team.

Retrieved from "https://sonicfanon.fandom.com/wiki/Digger_the_Dog?oldid=1801738"
Community content is available under CC-BY-SA unless otherwise noted.