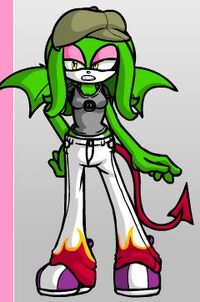 You may be looking for Diana The Rabbit

Diana is green combination of hedgehog and dragon, who has green wings and red dragon tail. Her attire includes grey shirt, white pants, pink shoes and beige cap. her pants includes fire pattern, although she doesn't like much fire.

Diana is cool and blinded of popularity. She is able to be kind for Rigger only, who has ability to help her, if she has problems. When with Rigger, Diana is gentle and really shy.

She is bit rude, since she has forgot friendship when she got famous from her singing voice. She still has good heart. You need to just talk to her right way, so she will listen you and act nice for you.

Music is Diana's life, which led her to study it. She got great singer in 10 years. When she had the chance to go to perform on concerts, she got famous.

Her attitude changed alot, which led him to sad situation: She got bus driver so mad, that he threw Diana from bus to road. After few minutes, there came a golden car. There were red fox, who wanted to help Diana. Diana gone to car and there she met her love. With the help of Rigger, she realized what popularity has done to her.

Rigger and Diana married each other some years later. Diana is currently practising policy among other people than Rigger.

Diana has so beautiful voice, that she can get anyone to join her. When on angry mood, she can use her skill called Burning glare to roast opponents from hatred. Diana is also known breakdancer.

Diana can fly with her wings. She is also artful dodger especially on air. She has also great speed, which is unleashed during flight

Retrieved from "https://sonicfanon.fandom.com/wiki/Diana_Smith?oldid=1772179"
Community content is available under CC-BY-SA unless otherwise noted.