I used to believe life was simple, that Dangerous Assassins,Sexy Mercenaries, and Evil Beings trying to enslave us were just works of fiction,yearning for them to be true anyway...In retrospect that world isn't looking too bad anymore. 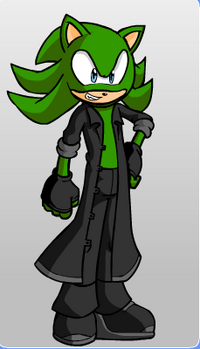 Throughout all of his appearances Dexter is portrayed as a Green anthropomorphic porcupine. His spines are those that can described best as similar to the well-known Super Sonic’s, sticking out in an upward direction. However the key features of Dexter proving that he is not part of the Sonic universe is his chest and his differing clothing. Unlike Sonic characters (Sonic, Tails, Knuckles, Shadow etc.) Dexter’s chest has no marks on it, resembling something closer to a male human. As mentioned earlier, Dexter’s attire differs throughout most of his adventures, again similar of that to a normal human. In AAA Dexter starts off wearing a black suit and (Although being customizable) later changes on default to a variation of his Matrix spoof outfit, the main difference being the lack of a shirt and sunglasses.

While at first Dexter may come off as cowardly, it only seems as such because of how normal he really is. Like any person who is not used to intense action and powerful opponents Dexter is extremely jumpy and emotionally vulnerable to shock in some cases. Although despite these cases, Dexter can be rather calm in talking to possibly hostile people, such as keeping his cool when first interacting with L the leader of a local branch of mafia. In addition to that Dexter also sees people through positive eyes, even being blind to his friend Vincent’s hate of him when he was younger, remembering him as a good friend instead of a jealous one. However as time went on he started to accept many people’s negative nature. Again much like an average person Dexter is confident in his physical abilities but always tries to find a peaceful way out and use them as a sort of last resort. Although later on as Dexter got stronger his bravery got more consistent and mature.

Throughout his entire childhood he was described as being “normal” and having nothing really out of the ordinary happen to him. Although when they were only 15, Dexter and his friend Vincent did get tied into a bad situation involving banned government weapon lines. In such they had many run-ins with an alien organization known as Nerowire. After the conflict they merely thought everything had already resolved itself. Finding the topic interesting, he tried pursuing some answers, however soon after he met with the results that led him to believe that all of such about the weapons were just a hoax. Looking at the only real thing supporting Nerowire’s true existence being fiction, such led Dexter’s outlook on life to change. Dexter soon realized and that most things such as secret government conspiracies, and Awesome Mercenaries didn’t really exist.

One day 6 years later while going to a job interview when in college he was sabotaged by a nearly destroyed criminal syndicate appearing to be a branch of the mafia. After being at the wrong place, at the wrong time and standing near a planted tracking device. He was chased on a train in order to be captured, but luckily escaped into the sewer. After a chain of strange events he ended up on another planet orbiting Earth, in some sort of Abounded Factory where after a misunderstood entrance, reunited with an old friend from the Nerowire incident. From there he learned of the Time Gems, mystical stones allowing for Time Travel. His Friend being a guardian of such stones warned him of the dangers of the stones, such as “The Stones picked their guardians” and that if Dexter got too wrapped up in this business the Stones could “Change him, permanently”. After a brief run in with an army of robots activated from the factory, accidentally used the Stones to travel. Ending up in a location he did not at all recognize, he was soon sought after by the police for “Stealing the Stones” , despite the fact that the gems didn’t even belong on the planet. After being pursued he was arrested, having the gems taken from him and put in a ultra-high facility prison along with a cryptic man named L, who claimed he would “give him an offer he couldn’t refuse”. Dexter agreed to this “offer” giving L just enough freedom to find a way to break out of their cell. After successfully and chaotically escaping the prison he introduced Dexter to “The Mafia” who L leaded. From there they trained him to be part of their team and tried to “help him” retrieve the gems.

Although starting off with no real fighting abilities, he did naturally possess good climbing ability. As his time around skilled people increased, he developed many of their strong abilities. From the mafia he learned how to use weapons and fire arms such as his signature dual pistols. Though more significantly after being possession with the time stones Dexter gained the power to slow time down allowing him to move much faster and pull off tricks normal people can’t. Additionally although unaware of it, after dealing with Nerowire for the first time Dexter was infected with many of its powers being able to have somewhat of an immunity to them and being able to at maximum power having abilities to cosmic levels, being able to shoot a black hole out of his hands after becoming intoxicated.

Early version of Dexter
Add a photo to this gallery

• The name Dexter is a play on the word Dexterity meaning agile and nimble-fingered as he can activate bullet time, moving and shooting a gun at high speeds.

Retrieved from "https://sonicfanon.fandom.com/wiki/Dexter_of_Awesomeness?oldid=1801220"
Community content is available under CC-BY-SA unless otherwise noted.