Don't you remember me? 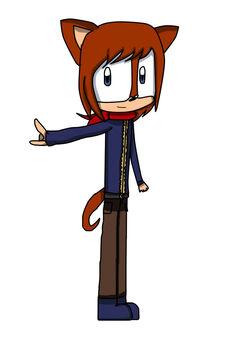 Derek the Hedgehog is a fan character created by Darkest Shadow. He is the husband of Lina the Hedgehog, the long lost but found host brother of Maranda the Hedgehogm, and the father of Ramona the Hedgehog. He also is very good at playing the bass, and plays in a rock band.

Derek is very funny and comical most of the time. He makes people laugh a lot, sometimes to the point where they fall on the floor. Usually, he jokes around and tells them to some of his friends. Mostly, they just reply "lol" or "lmao".

However, despite his funniness, he is very calm and collected. He knows how to take things seriously, and tries to stick to what he knows. However, he isn't serious to the point where he can't crack a laugh to offend someone. If it's really funny, he'll still laugh anyway.

Derek currently stands at 3 feet and 9 inches tall and weighs 90 pounds. His fur is brown-a little bit of red scheme. His skin is peach, and he has short hair, going down to only his neck. His eyes are a blue-grey color, like a cloudy sky. His tail is shaped like a moon.

Currently, Derek wears a blue-grey jacket with a golden zig-zag design in the middle of the zipper. Underneath, he wears a tan shirt.  He also wears a red scarf around his neck for some warmth. For pants, he wears dark red-brown cargo pants. To complete his outfit, he wears blue short boots.

Bass Guitar- Derek is an excellent bass guitar player. He used to play in a band called "Tree City", but then they disbanded and went their seperate ways. As of now, Derek plays the bass really good and hopes to find a guitarist and a drummer to complete a band.

Derek is also really good at ice hockey. He started playing at a young age and got really good at it. He's really fast on ice, which is why he plays both offense and defense.

Derek is also pretty good at lacrosse. His accuracy at throwing the ball with his lacrosse stick is excellent. His team doesn't really win a lot though...

Night Vision- Derek has excellent vision in the dark. To him, it's sort of like wearing water goggles in the daytime. Everything is seen like daytime, except with a blue tint. This can be really helpful in a game of manhunt, or steakouts.

Insomnia- Derek has also been diagnosed with Insomnia, which means he can't sleep. It is kind of scary, yet it's really helpful. Instead of sleeping at night, he goes up in front of his house and looks up at the stars. However, he sometimes takes special pills that makes his insomnia temporarilly go away so he could sleep.

Retrieved from "https://sonicfanon.fandom.com/wiki/Derek_the_Hedgehog?oldid=1800480"
Community content is available under CC-BY-SA unless otherwise noted.