Denise the Chameleon is a 19-year-old, anthropomorphic, female chameleon. 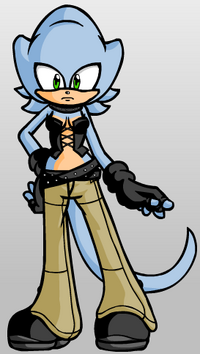 Little is known about Denise's origins or early life, except she was used as an artificial experiment by some unknown scientists for the most valuable project called Project Goddess. Their ultimate goal was to create an army of perfect goddesses. During their project, they had enhanced and tweaked their abilities, including speed, strength, agility, power, and intellect.

After the experiment, she woke up and didn't remember her past due to forgotten or repressed memories. The scientists implanted a special chip on her for enhancements and they sent her to an unknown location in Mobius. She also realized that she was suffering amnesia so she spent her life living in the hidden forests away from people. Adapting to the lush environment, however, Denise experienced something new and intriguing for her survival.

Denise is often portrayed as a calm, mature, level-headed individual. Being both an assassin and mercenary, she seems both serious and diligent. She is having a little difficult time making friends and accepting them and when she is around them, she likes to keep her thoughts to herself. However, she is not entirely emotionless. Despite her amnesia, she is very intelligent and will not let anyone or anything cloud her judgment.

Like all chameleons, Denise can use the camouflaging ability to blend in the surroundings in order to become invisible at will and she can also climb and walk on walls. As an artificial experiment, much of her body is enhanced to be far stronger than that of a normal Mobian. She has excellent martial arts skills, balancing out with punches and kicks. It gives her quick reflexes and superior agility to jump, dodge, roll, and perform backlips and front flips. Her stealth is very important to her when she can hide in unseen locations. She possesses the same super speed as Sonic or Shadow so she can possibly run faster. She is the master multilinguist so she can speak many languages. She is also well-trained with firearms and knives that will make her the deadliest weapon.

Her genderbender counterpart, Dennis
Add a photo to this gallery
Retrieved from "https://sonicfanon.fandom.com/wiki/Denise_the_Chameleon?oldid=1799883"
Community content is available under CC-BY-SA unless otherwise noted.