Delightful the Cat, or Delight, is a 24-year-old, anthropomorphic female cat and the fursona of Delightball. 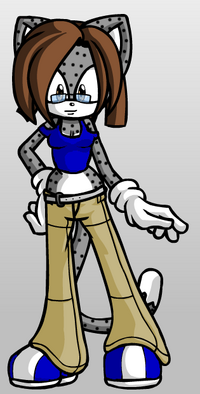 Ashlotte was born in a lush, peaceful community somewhere in Mobius. She was a shy, normal kid until some other kids at her school bullied her, calling her weird names and pushing her. She ran away from them and told the teachers on them to stop bothering her. At this moment, she could play in the sandbox all by herself and remained quiet. Because of this, it made her realize that she was a special, lonely girl who couldn't make any friends whether they were good or bad.

Delightful is a Cheetoh cat who has dark-brown, straight, shoulder-length hair and gray fur with black spots. Her non-furry muzzle, inner ears, chest and tail tip are white. Her eyes are a solid golden amber. She is athletically built for a feline.

Delightful is a shy, quiet, smart, sweet young lady. She is a loner and has difficult time making new friends during childhood only because they are being nice to her. When she suffers from depression, she hides her true feelings and keep them bottled up inside because she takes mental, verbal, and emotional criticism seriously. She doesn't talk very much unless something comes up with a conversation. Despite this, she is a kind, caring soul who loves her family dearly and under her calm, mousy exterior, she is quite friendly whenever she gets to know a lot of people better. If she's not around them, she can keep her thoughts and opinions to herself, especially when she talks to herself; therefore, she suffers from autism.

Delightful knows how to take care of herself if she'll manage and living an independent lifestyle, she surprisingly has a knack for adventures and going places she has never been before. An avid lover of video games, she particularly likes fighting and action-adventure genre and surfing the Internet on her computer.

Like all cats, Delightful can jump as higher as she wants to and climb trees. She is very proficient in advanced combat, including the balance of punches and kicks. She has heightened agility and reflexes as she can dodge many attacks and perform somersaults and flips. An expert swimmer, she can also swim underwater at great lengths.

Delightful can be physically overwhelmed by anyone who is stronger than her when she gets easily knocked out. She can also be emotionally insecure when easily intimidated or outraged. She is sensitive to rude comments.

"Hello. I'm Delightful. You can call me Delight, for short." -Delightful's introduction.

That's me w/o the glasses

Her summer outfit
Add a photo to this gallery
Retrieved from "https://sonicfanon.fandom.com/wiki/Delightful_the_Cat?oldid=1774268"
Community content is available under CC-BY-SA unless otherwise noted.