Decoe is a robot that was created by Dr. Eggman, and is also canon in the Sonic X series. He is most commonly seen with Bocoe , and together they work for the Eggman Empire, along with Bokkun. Because Eggman is an ally to Joseph T. Marley , they are allies to him as well. 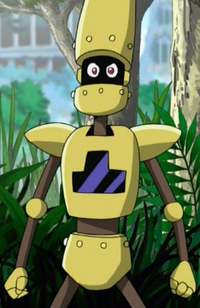 After Scratch and Grounder had broken down permanantly, no longer being able to serve Dr. Eggman, he created Bocoe and Decoe in their place, as his main servants. They would and continue to complete tasks such as maintaining the machines Eggman builds. He and Decoe are hardly ever seen apart.

Decoe, along with Bocoe, are first seen in the first part of Chapter 4, leading Rex down a dark hallway, and later tying his leash to one of the bars. They leave shortly after. He and Decoe are mentioned in the second part of Chapter 4, when Tails notes they mentioned something about "a friend" letting them borrow their "guard dog".

The third part of Chapter 4 is taken from his POV, shared with Bocoe in 3rd Person Narration. They note that Tails is trying to escape, and they catch up to him using their rocket feet feature. After a chase scene, they finally manage to catch him, and bring him back to the control room. Once they are there however, they find Scratch and Grounder holding Bokkun hostage. After they introduce themselves to each other, in a comically hostile way, Bokkun points out Tails escaping out of the window, but he flies away too quickly for any of them to catch him.

So far, Decoe has no differences from his canon counterpart. He tends to be somewhat absent-minded, clumsy and stupid, sometimes even making a mess of Eggman's plans. Afterwards, he and Bocoe tend to reflect on their failures, similarly to Scratch and Grounder.

He, along with Bocoe, have various mechanical skills, allowing him to operate Eggman's machinery.

When combined with Bocoe, they can make a light to summon Bokkun.

In Sonic Fanfiction, He along with Bocoe have rocket feet now, installed by Eggman sometime before it started. Most of the time, it runs quite smoothly.