Start a Wiki
This is an article about Deborah and Honesty the Combined Hedgehogs, a character created by Megaphantaze on 09/25/2015.

Deborah and Honesty the combined hedgehogs 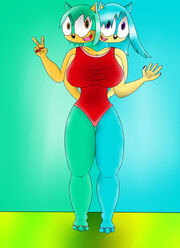 Deborah and Honesty are hedgehogs, who are combined into one body by Boot Man.

Deborah is green hedgehog and her hand, mouth and muzzle color is dark beige. She has red nails on fingers and toes. Her attire has orange shirt and blue trousers.

Honesty is blue hedgehog with light beige muzzle, mouth and hands. Her nails are blue. She has Purple shirt and red trousers.

(The picture above shows their swimsuit, which is red)

Both girls has two hands, one chest and one leg.

Deborah and Honesty were once two single persons, who deceased somewhere 1980's. they were found by Boot Man, a scientist robot, who is professional in creating mutants and hybrids. He brought these two persons back to life, but he made a mistake in process: He accidentally put the persons in combining machine and the bodies were melted as one. Deborah and  honesty noticed this, but they weren't mad at all. Honesty, who is known from advantaging mistakes, didn't wanted to be separated from Deborah. Boot Man however warned these two from their appearance that it an catch attention. Unfortunately, these girls are pretty ignorant and they did opposite thing.

Deborah and Honesty both have two hands, which helps them do multitasking, when working together. Deborah can cook and Honesty can sew. They can also play instruments and have their first hybrid ban called hydra sisters. 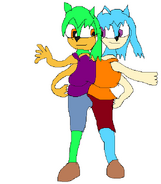 Deborah's and Honesty's usual attire
Add a photo to this gallery
Retrieved from "https://sonicfanon.fandom.com/wiki/Deborah_and_Honesty_the_Combined_Hedgehogs?oldid=1798723"
Community content is available under CC-BY-SA unless otherwise noted.