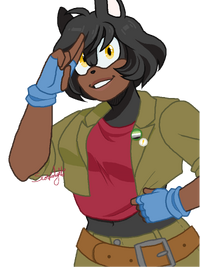 Death is a Mobian Hedgehog, standing at around 5'5". Her fur is completely black, while her arms and muzzle are a dark brown. Her hair is cut short in a bob hairstyle, perfect for her sporty and adventerous lifestyle. Her eyes are a bright golden color.

Generally, Death wears a small magenta tank top, a short green jacket and matching pants. She also wears light blue gloves and matching boots, along with a large belt around her waist. She also wears a few buttons on er jacket, one of which is of the aromantic pride flag. She wears this in everyday scenarios as well as when she's 'adventuring', as she likes to call it.

Death's cheer outfit consists of a pink tank top and matching skirt, her school's logo across her chest. She wears pink sneakers and knee-high white socks.

Despite her gloomy-sounding name, Death is an extremely peppy girl, who tends to be very excitable and energetic. She is optimistic, always trying to make the best out of every circumstance she finds herself in.  She believes in kindness, first and foremost. She is outgoing, and appreciates compassion and doing the right thing, althoug she does not particularly care for rules. If she sees someone who is being cruel to another, she will almost always step in to break up whatever's happening. She tends to follow her own moral compass, rather than any rules placed upon her. While she sees herself as a good person at heart, Death tends to be fairly self-centered. She holds her own personal freedom of expression and her own welfare above anything. She also dislikes confining laws, and distrusts most authority figures, purely on principle.

Death has super strength, which allows her to lift extremely heavy objects, as well as people. She's the bottom of the cheer pyramid for a reason.

Death lived with her parents and unborn sister in Brookdale. She was very upset when her parents divorced, but she concealed it and didn’t complain when she and her mom moved. After a few months living there, Death’s sister was born. As soon as Death laid eyes on the little baby, she knew she would love her to death.

Death has not appeared in any roleplays at the current moment.

Death has not appeared in any publlished fanfictions at the current moment. However, she will appear in a fanfiction that is currently a work in progress.

Retrieved from "https://sonicfanon.fandom.com/wiki/Death_the_Hedgehog?oldid=1864192"
Community content is available under CC-BY-SA unless otherwise noted.