Start a Wiki
This is an article about David the HedgeFox, a character created by Darkest Shadow on 3/25/2010.

When you first hop onto a skateboard, you're ultimately gonna feel like you're gonna get hurt. But if you practice, that fear will slowly start to go away up to the point where balance and speed doesn't matter. You evolve from trying to go down a hill, to acid dropping your first half or quarter pipe, and then adding tricks is the scariest part because you don't know how many you can do on your jump. But since you're just starting, I'm'a take you back to square one.

— David teaching Sebastian how to skateboard 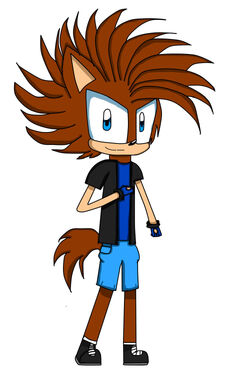 David the HedgeFox is a character created by Darkest Shadow. He's ranked #3 of the best skateboarders around the globe, starting at the age of eight and doing it for eleven years now. Four years ago, he got onto the Elite Skateboard Team, as he and his team won many medals trophies and competitions. He would go literally anywhere with his skateboard, sometimes even indoors! When he's not doing competitions, he is usually down by the skatepark with his friends. However, on every Friday Night, him and his clique go down to an ally in the back of the mall and hold their "Swag Fests"

Even with his talent in skateboarding, there are also many other things that shape David into the man he is. Recently, David has discovered the ability to manipulate lava at his command. He is also a very talented rapper, as he can randomly rap words and rhyme them off the top of his head with ease. Even with that music ability, he is able to play the drums very well. All of this makes him part of the "Eight Mates", a group of best friends who hang out and fight crime.

David is one of the eight main protagonists in the "My Sweet Life" series: an alternate universe of what happens in the lives of him and his friends. Although there are a few differences than his original counterpart, most of his laid-back personality remains the same.

When Pianoteen originally created David, he looked the same as he did in the DTA series. However, he thought the idea was a bit bland. He also made him a bit more nerdy. He was also first off as a hedgehog. Yet, he still had his trademark hair style, except a little shorter.

Later on, Pianoteen made a little "makeover" for him. He made his hair white, and his skin blue, to make him related to Sonic. Later on, he thought David looked very ugly like that, and went back to brown.

Then, David became a Sonic recolor with spikey and cool hair, just like the original. Then, he heard about recolors and how they could be judged as overrated, so he changed him up, yet again.

David still kept his old design, but then had another alternate design, used in Stars on Broadway Street. A year later, he somewhat altered his clothing to make his outfit for Winter Wonderland.

In 2014, unlike most of his characters, the creator actually made David his own outfit. Through many concepts, he finally found a good look on him. The look has been renewed for the reboot of the Mariala Anime as well. He also added gloves

David lives alone in an average house in Mariala City. He usually likes to ride on his skateboard to wherever the road takes him. He is very good at doing all sorts of stunts, such as flip tricks, grab tricks, grinding, and manualing. He even has his own quarter pipe set that he earned. Usually, lots of people get stoked when they see his awesome tricks.

He usually goes deep into a certain Mariala ally: His gang's secret hideout. He usually hangs out with people like Cole, Danny, Sebastian, Candace, and maybe Kester. This is where he holds his city-famed "Swag Fests". He either raps, arm-wrestles, or sometimes even break dances.

David also competes in skateboard competitions, and usually wins all of them.  He is a master of combos and always builds up speed. He is very competitive when it comes to this, it's almost scary!

David has that fun, cocky and playful personality. He is enjoys being thrilled, excited, and even sometimes scared. David seems to also be really funny as he sometimes makes jokes about random things that are on the topic of what they are saying. He's pretty easy to talk to and quite a character.

David also happens to be a mischief maker when it comes to school. He's one of the kids who is a little more on the disturbing side. He's snotty, facetious, and sometimes won't shut up. Even though some people find him funny and a class clown, others find him to be class-inappropriate.

David currently stands at a tall height of 3 feet and 9 inches tall and weighs about 88 pounds. He is a brown colored hedgefox with peach skin, and a peach muzzle/inner ears. He has no fur on his arms nor his tummy. His ears are a little bigger than a hedgehog's but smaller than a fox's. His hair is extremely complex. He has spiky hair with about 30 of those spiked ends, if not more. He has detached eyes and light blue pupils. His tail is spiky like his hair, and has sharp tips.

As of now, David wears a brilliant blue comfortable-fit short sleeve shirt. He usually wears a dark grey thick-sleeved over-shirt over it. He also wears light blue cargo shorts with two front and two back pockets. For shoes, he wears white socks and black & white skate shoes. He also wears blue fingerless gloves with an open hole in the middle, and black cuffs.

My Sweet Life: Escape From the Paparazzi- In this game, David is one of the eight main playable characters in the game. He has been chased down to the point where he is lost and must find her way back home. Along with this, he needs to avoid the fanbrats, media and most of all, the paparazzi. He amazing powers, and a good skillset in the game.

Skateboarding- David's main skill is skateboarding. It just comes very easy to him. He's been interested in skateboarding ever since he was young, and now is practically a pro at it. He does insane tricks, grinds and takes risks. He also happens to rarely be seen without his skateboard. He always seems to be riding wherever he goes, ollie-ing off of higher surfaces, and grinding on the handrails.

David's favorite thing to do on his skateboard are flip and grab tricks off from a high surface to a low surface. He usually does BS 360 Double Kickflip. He also sometimes grind stalls on the escalator hand rails, and tricks and flips on the half pipes. David also happens to compete in skateboarding competitions all around the globe, and is well recognized for the fact that he is a skating legend. He wins many trophies and awards for this.

Rapping- David is extremely good at rapping. He can rap words off the top of his head, and it'd actually be very easy for him. He can really bust a rhyme. He even sometimes goes into a studio to record a single for a song, and he's usually a featured rapper in many artist's songs. He's been rapping since a young age, and came a far way ever since. Since it's the main event at Swag Fests, he is also good at rapping and making a good comeback.

Drums- Believe it or not, David can actually play a drum set really well. He's been playing it since he was a preteen and has became very good. Now, he lays down beats when a "hot girl" walks out of a room. He also sometimes goes to Central park, and leaves something out to get tipped. It's not hard to play more than one drum at a time for him, so he can lay down great rhythms and even come up with his own.

Attack: 9.5- David is very strong, and can throw attacks that can make someone sore for days

Defense: 8- David is pretty good at defending himself.

Speed: 8.5- David is pretty fast and has potential to reach superspeeds.

Magic: 4- David just learned his magic ability, and isn't very good at it.

Intelligence: 5- David has little no no book smarts, but he is very street smart.

Skills: 7.5- David has a pretty good variety of skills

Stamina: 9- David has a lot of energy from running a far distance

Tolorance: 7- David is able to withstand many attacks, especially physical.

This character's fourstat code is 8845

Superstrength- David is massively strong. He seems to lift a lot, and has a strong core. He happens to be able to lift up a few metric tons when he's crime fighting. He happens to usually win student body president for this reason. His strength usually relies in his punches, as he can punch through metal walls with little to no trouble. He can push massive objects and obstacles out of the way as well, such as bolders and stone.

Lava Manipulation/Geo-Thermokinesis- A somewhat new skill to David. He has learned how to do this a few months ago. He is still learning how to use this ability. When he does this, the lava is blazing hot, but he is almost resistant to it, as it only feels like it's like 150 degrees, when it's way, way hotter than that. His lava is about 900 degrees celcius, and could damage a person very, very badly.

Apparently David seems to fear people who happen to be way too smart. He finds them to have bigger heads which will explode later if they gain any more information. He also thinks that all they talk about is school, which bugs him out a lot.

David also happens to be somewhat clumsy when he isn't on a skateboard this sometimes makes him break somewhat fragile items. He bumps into people a lot without knowing it, and without an apology.

Retrieved from "https://sonicfanon.fandom.com/wiki/David_the_HedgeFox?oldid=1838056"
Community content is available under CC-BY-SA unless otherwise noted.