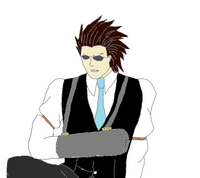 We have to stop Wise before it's too late!

— Darke on The Church of Wiseology

Darke Hash, is a human seen in Shadow the Hedgehog 2. In the public human eyes he is known to be a trusted member of GUN, working in their technologies department. However despite his seemingly innocent exterior, he is secretly known as the leader of the hack-tivist group against GUN's new employer Jerome Wise. He has been renowned for his ability to create Avatars for Commanders to bring virtual robots into battle against live GUN bots. He is referenced by Silver as one of humanity's last hopes for preventing the apocalypse, alongside Shadow and Omega.

In all of his appearances, he wears a grey tie with a striped vest over a plain white shirt, along with black sleeve garters. He is also seen wearing black slacks and dark shoes. Most noticeable of his attire is his grey arm cast which he never once references and often tries to take people's attention away from. When SHadow asked the GUN Commander, he states that Darke was injured in an explosion. This is further complemented by his wearing of sunglasses which he never removes, concealing his eyes. The Commander explains that even he is unsure of why this is but reasons that Darke likely has a "condition" of sorts. Additionally, he sports dark hair which is looks to be slicked back.

Hash appears to have a mostly impatient and aggressive demeanor. Despite his slick and calm exterior, he is quick to get frustrated by Wise's attacks and any form of resistance. In the neutral path, when Shadow refuses to help The Rebellion Darke allows him to get captured by Wise so as to try and get his to be created successor to help instead. Darke also has an interest and almost an obsession over Black Alien technology, even loosely modeling his air crafts and air-bases after the destroyed Black Comet, which he dubs the Darke Comet.

Hash is shown to be extremely knowledgeable in hacking and has a revolver at his side at almost all times, which is to make up for Hash's supposed inability to use his right arm. In addition, he has extremely detailed knowledge of Black Arms technology is also fascinated by all of the operations which took place on the Space Colony Ark.

Fascination With The Black Arms

Hash also has an interest and almost an obsession over Black Alien technology, even loosely modeling his air-crafts and air-bases after the destroyed Black Comet, which he dubs the Darke Comets. Hash has been seen creating many technological replicas of Black Arm weapons and creatures, including that of the Hash Worm.

Retrieved from "https://sonicfanon.fandom.com/wiki/Darke/Hash?oldid=1864788"
Community content is available under CC-BY-SA unless otherwise noted.