“Come on Shadow. Don't tell me you really thought you were Black Doom's only "experiment".”

— Darke to Shadow upon his identity being revealed 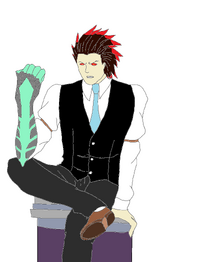 Darke Doom is the true identity of Darke Hash, as seen in Shadow the Hedgehog 2. Following the third level in the Dark storyline, Shadow and Omega interrogate Darke only for him to expose his true identity. After finding out about this and patriotic attitude towards his alien race Shadow and Omega swear to destroy Doom's rebellion against Wise. Despite Darke's obsession and hopes to see the Black Arms one day return he is also committed to the safety of the humans and earth.

Doom is almost exactly the same as his appearance as Darke Hash with a few clear differences. Without his sunglasses it's revealed that Darke's eyes appear very similar to that of Black Doom's, while his right arm is almost entirely that of a jacked -p, more powerful version of a human arm with Black Alien skin.

Darke was conceived by Black Doom during his second trip to earth in the original Shadow the Hedgehog. It is unknown who Darke was before then besides a talented hacker, but he appears to be unaware of a past beyond that, referencing this as his birth. After Darke Doom learned how to control his powers he joined GUN, putting his hacking skills to use. Darke also appears to how somehow amassed enough money to make an exact recreation the Black Comet "The Darke Comet" and created robots that look like Black Arms creatures.

Throughout Shadow the Hedgehog 2, Darke Doom only plays a role in the Dark story as the antagonist and the final story as Shadow and Omega's ally. In the Dark Story Shadow and Omega decide that Darke is more dangerous than Wise and plan to eradicate the Rebellion all together in an effort to at first save the planet and later achieve a sense of satisfaction and power.

Retrieved from "https://sonicfanon.fandom.com/wiki/Darke/Doom?oldid=1864789"
Community content is available under CC-BY-SA unless otherwise noted.