"This book, Shadow, is all I know about you. It's the book of your past, present, and future." -Dark the Cat, in The Adventures of Shadow and Dark 1 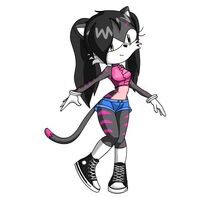 Dark the Cat is a female black cat with pink stripes. She has emerald green eyes, and wears her black hair in pigtails. She wears a short, pink shirt, and blue jean shorts, with long white socks and black high-tops. She has small ears and white gloves, along with a fuzzy white muzzle. She has a small black nose, and long eyelashes.

Dark the Cat is fun-loving, and a bit of a show-off. She always tries to do what's right, all though, her decisions aren't always the best. She's always happy to have a good laugh, and if she wants to do something, she does it, no matter what anyone else tells her. She gets stressed easily, witch is bad in some situations. If she makes a promise, you can count on her keeping it!

Dark the Cat lived on a planet far away from Mobius. She lived with her father, the ruler of the planet, her mother, and her friends. After a normal day, she went to bed tired...and when she woke up, she wasn't at home, but in a medow. This was when she was only a young girl. She couldn't remember a thing, and found that she had new powers. She learned from her dreams her past, and what had happened, witch had simply been a twist of fate. She found a run-down log house in the medow, and lived there. In the basement was a library filled with blank books. She began to write in them.

After a while of her living this life, she met the Hedgehog, and saw into his future, seeing that their futures intertwined. Things went rough at first, but eventually, Dark gained the courage to tell Shadow about her vision. You can read more about this here: http://www.quotev.com/story/2425120/Shadows-in-the-Darkness/

Dark can see into anyone's future but her own, and that's not always a good thing. But the future can be changed, thank goodness. Another one of her powers is very limited telekinises, as shown when she make the book levitate in the first fanfiction she appears in. She can also teleport, but only if she has enough energy, witch is very little of the time.

Dark's abilities include being athletic, and nimble. She can do various Karate moves, such as front kicks and flying side kicks. She can do things such as flips and cartwheels, but these do not help her when it comes to fighting.

Dark's main weakness is stress, witch comes to her a lot. Being stressed make her tired, witch makes her fighting downgraded quite a bit. She gets stressed mainly during big fights, but also right before public events such as parties.

Retrieved from "https://sonicfanon.fandom.com/wiki/Dark_the_Cat?oldid=1559317"
Community content is available under CC-BY-SA unless otherwise noted.