You may be looking for his Prime Zone counterpart

I'll tell you what: I'm going to keep you until I have what I want. Once I do, then you can return to the Base. And since you asked so nicely, I'll let you and one person of your choice live. But you cannot change your mind once you choose, so...choose wisely.

— Enerjak to Stripe, Shadow of the Dark World 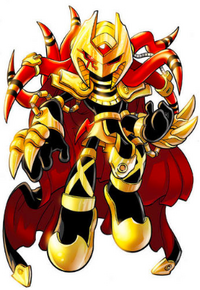 Enerjak retains his appearance from the Sonic the Hedgehog Archie comics released in the US.

Enerjak retains his personality from the Sonic the Hedgehog Archie comics released in the US.

As such, this Enerjak is incredibly cruel, mean, and unforgiving. Typically, when talking to enemies he knows on a personal level(like Jani-Ca or Braveheart), he speaks with them in a calm, almost kind or caring manner; this is likely either due to true feelings he still harbors for them, or (more likely) is out of sadism and a desire to see his enemies afraid at their helplessness.

Before the Series: Enerjak past is no doubt the same as in the comics.

Secrets of the Dark World: Conquest: Enerjak first appears as Knuckles in the Prologue. During a meeting between the Guardians and the leaders of the Storming Alliance, Knuckles and Fox get into an argument, and when Knuckles grabs Fox's jacket to pull him closer, Splash and Silver interfere, practically snarling at them to stop fighting. Later, when Knuckles attacks Sonic, a Storming Alliance patrol attacks him in retaliation, and Braveheart is injured. Fox snarls at Knuckles and takes his patrol away. Later, Knuckles attacks the Base and nearly strangles Braveheart when the Storm Fighter fox rushes back to save his family. Knuckles' attempt on the warrior's life is ruined when Lucas uses Accelerock to stop him. A few moons later, after the Storm Fighters-now relegated to several Mobians and a few Pokemon that weren't Storm Fighters to begin with-settle into their new Base, they attempt to attack and defeat Knuckles, who has now officially become Enerjak. Enerjak grabs Braveheart by his throat and floats up into the air to keep the land-bound warriors from attempting to rescue him. Fox attempts to rescue his son as Fire Fox, but is knocked into a building. Fire Fox lands, reverts to normal, and is crushed under some falling rubble. When Braveheart tries to rush over to fight Enerjak, almost driven mad with rage and grief, he is blasted back by an explosion. Later, during several more attempts to overthrow him, Enerjak easily defeats the Storm Fighters, resulting in Braveheart being horribly maimed and crippled.

Haunting Evil: Enerjak first appears in the Prologue, when Boulder the Lycanroc is dreaming. He states to Boulder that he interests him, and the Lycanroc has a vision of when Officer Forrest Wolf is attacked, and later his death in the hospital. That morning, Boulder explains his dream to Austin Smith, and the dog nearly chokes on the mouthful of water he's trying to drink. Austin explains Enerjak's past actions to Boulder, and the Lycanroc takes note of Storm giving him a worried look over Austin's broad shoulders. The three warriors return to find the Base under attack, and Enerjak goes after Austin, grabbing him by the throat while cruelly reminding him of the events of Austin's Return, saying he was told the warrior had great knowledge of the Worlds. To avoid revealing the truth, Austin says that Finitevus lied and that his word was not to be trusted. Enerjak states that the Worlds will be his regardless, but is forced to let go of Austin when Dakota body slams him from behind only to leap out of range of an attack. Enerjak knocks Austin onto his side and sends Crunch the Lycanroc flying with a blow to the head that knocks him unconscious before knocking Austin out. Later, Enerjak tries again after Lucas, Boulder, Dillon, and Dakota leave to get help from the Freedom Fighter leader Jani-Ca. Dakota body slams Enerjak again, and the mad villain grabs Dakota by the throat. He sneers that the dog needs to learn some respect while generating a forcefield to prevent the other warriors from getting to them. He then teleports away, taking Dakota with him. Afterward, Enerjak reveals his plans to Dakota, planning to use the young dog as leverage against his Teammates to force them to surrender to his demands. For an unknown amount of time, the warriors train for battle before the day of Enerjak's ultimatum. Then, Enerjak arrives to hear the warriors' answer, and when they refuse, summons a horde of Prelates in an attempt to overwhelm them, but is overwhelmed in turn by a Chaos Continental Crush from Boulder and Fire Fox with help from Master Splash. After the Z-Move, Boulder uses Accelerock to repeatedly body slam Enerjak until the dark being disappears in a flash of light, and the battle is won; at the cost of Dakota, as it is revealed that he was struck so hard by Enerjak that it broke his neck, killing him instantly. The battle is later mentioned by Finitevus when he calmly states that he heard about what happened.

Storm of Warriors: In the first Chapter, Enerjak captures Austin in a repeated effort to weaken the warriors, since Dakota was dead. Braveheart helps the Prime Zone warrior escape, but when Austin gets lost, Enerjak pursues and recaptures him, strangling him into unconsciousness. Later, Enerjak arrives at the Base to find the warriors waiting for him, and engages Fox while his Prelates battle the warriors on the ground. After Austin and Boulder successfully pull off Splintered Stormshards against Mephiles, the Z-Move also weakens Enerjak enough for Chaos Fox to destroy him once and for all with Overheat. After the battle, Boulder hears Enerjak's threatening whisper in his ears when he stares at the villain's empty armor, promising to return, but Boulder states he never will before absurdly wondering if anyone heard him.

After the Blackout: In an effort to stop the warriors' work to rebuild Red Gate City, as well as destroy them and scare away the younger members, Infinite creates and uses a clone of Dark Enerjak and Mephiles the Dark, but only succeeds in confusing the older warriors, with Markus the Hedgehog noting his references to past events.

The full extent of Enerjak's powers are unknown. What is known is that he possesses inhuman strength, the ability to fly at will, summon various beings called Prelates for his various needs and requirements, and can utilize Chaos energy for various needs as well.

So far, the only weakness Enerjak has been shown to have is that he is vulnerable to his own attacks if they are redirected back at him, as exploited by Silver the Hedgehog in Archie Sonic Universe Issue 28 during his fight against the villainous being. It also seems that he can be brute-forced into defeat, as done by Chaos Fox in Revenge of Enerjak, Feral Fox in Austin's Return, and Boulder the Lycanroc's Chaos Continental Crush in Haunting Evil.

"Enerjak may be gone now, but he's not finished with us. This Enerjak is not like the one we are familiar with; the one from the War of Time, from the Battle for Lamarkie. We must keep our eyes open if we don't want any more of our warriors to end up like Dakota...or worse"
—Austin to Boulder, Haunting Evil

People that have been killed or injured either directly or indirectly in the series.

Throughout their personal war, Enerjak spoke to Braveheart in a calm, caring matter, even while holding the dying fox after stabbing him. Even when faced with Braveheart's scorn as he is dying, Enerjak remains calm with him, promising to end his pain and heal him if he comes willingly. Despite this, Enerjak is still willing to threaten him.

Like Braveheart, Enerjak addressed Jani-Ca in a calm, caring manner, but was willing to threaten her any way he could. Braveheart's death hurt her greatly.

Enerjak does not treat Fox with any respect, likely due to the death of the Fox of his own Zone. While fighting Fox in the Final Battle, Enerjak relentlessly mocked the leader.

Possibly due to Stripe's young age and nervous demeanor, Enerjak treats him in and almost caring manner, but is just as cruel and snide to the pup, vaguely threatening him, and mocking his attempts to escape. The way Enerjak are Stripe is probably out of sadism, similarly to Infinite, specifically as the unnamed leader, as the villain would regularly taunt and mock the children he held captive.

Enerjak took an interest in Stan because of his previous agreement with Infinite. During his occupation of the Base during the Return of Darkness arc, Enerjak frequently taunted Stan, and tried to manipulate him because of the Wolf's unfortunate circumstances. It's possible this is why he let him live after thwarting his escape attempt and failing to catch Pixie, who was escaping with him.

Originally, Austin's Return would be Dark Enerjak's last appearance as a major antagonist in the series, until the concept for Haunting Evil was thought up. Additionally, Enerjak was originally not intended to claim another victim, but this was also changed.

Apparently, when grabbing his enemies(namely Fox or Braveheart (Dark Mobius)), Enerjak likes to grab them by the throat. The reasons for this are unknown, but are likely because:

It was originally going to be mentioned that a vision Boulder has would show the day of when Enerjak returned regarding his ultimatum, but this was forgotten.

Retrieved from "https://sonicfanon.fandom.com/wiki/Dark_Enerjak_(Burpy%27s_Dream)?oldid=1816230"
Community content is available under CC-BY-SA unless otherwise noted.