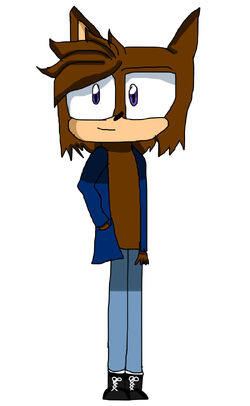 Danny the Hedgehog is a character created by Darkest Shadow. He is a professional boxer, with a good sense of fashion.

Daniel Brady Gates is a nineteen-year-old hedgehog from Tamaruin City. He has been living with his parents his entire life in a small house, right near the town border next to Mariala City. He stayed there because he liked the community. Normally, he likes to cross over the border and spend most of his time in Mariala City where his clique usually used to hang out.

Danny's life is dedicated to boxing. He practices four hours a day, five days a week to keep in top shape. He travels all around Lacancory to compete in championships and is one of the top 30 boxers in New Verona. He has won four national championships, however, he has yet to win his first intercontidental title.

Standing at 3'10, Danny is a hedgehog with brown fur. His hair is rather long and flowy, going gown to his shoulders. He has bangs on the right side of his face. He has fur all over his body. His skin and muzzle are both peach. His ears, unlike most hedgehogs, are significantly longer and pointier. His eyes are disconnected with vibrant purple irises.

As of now, he wears a dark blue and opened jacket with no shirt underneath to show his chest. He also wears light blue jeans. He also wears black Nike sneakers with white laces.

Danny is best described as fearless. Incredibly brave and carefree, he could face any challenge thrown right at him. He has confidence even when he doesn't need it, and the words "give up" never pop up in his mind. Some people may think he may be crazy because of this, but he just thinks everyone is just too scared.

Danny is also extremely charismatic. Charming, brave, and funny, he's the ideal boyfriend for a common teenage girl. A great sense in fashion and very calm and understanding, it's hard to break a relationship with him.

Danny's whole life is centered around his main passion, boxing. Danny trained in boxing all of his life and is known to be one of the best boxers in New Verona. He made it in several fights, and is now a professional, taking on Lacancory's strongest and most formidable opponents.

Of course, boxing involves tons of arm strength, which is just what Danny has to offer. His punches are extremely strong, and can seriously injure his opponents. It only takes a few punches to knock out his opponent. Boxing also needs for him to defend, block, dodge and tolerate the punches thrown at him, juggling all excellently, making the perfect recipe for the amazing boxer.

Even though the amount of training he does is ridiculous, he also needs to keep in top condition by increasing his strength, stamina, and durability. He often goes to the gym to either lift weights or to run on the treadmill.

The daredevil he is, Danny isn't afraid of anything. So far he has done several extreme sports to prove his fearlessness, such as rock-climbing, cliff jumping, skydiving, ziplining, jetskiing, kite-surfing, trampolining, hang gliding, skiing, bungee jumping and scuba diving. He plans to do much more dangerous and risky events in the future.

Attack: 9- As a boxer, Danny is packed with power, delivering teeth knocking jabs.

Defense: 8- He is also trained to defend himself and tolerate attacks well.

Magic: 0- Danny has no magic ability.

Evasion: 9- With training, Danny can evade most attacks thrown at him.

Skills: 9- Most of Danny's skills involve guts and bravery.

Stamina: 9- His training makes sure that he can stay strong even when in weak moments.

Retrieved from "https://sonicfanon.fandom.com/wiki/Danny_The_Hedgehog?oldid=1867041"
Community content is available under CC-BY-SA unless otherwise noted.