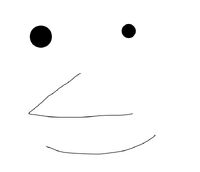 Despite looking like a harmless program, Daniel is actually a dangerous program invented by an anonymous hacker. He loves to stalk and kill the ones foolish enough to install his program.

daniel.exe‘s icon and system appears to be a crudely drawn face with beady eyes and large nose. In his “Assasin“ form, he has a more realistic and creepier form with a realistic face.

When first opened up, he appears to be a harmless desktop assistant who can be asked for questions, read schedules, and read notes. However, besides from being a desktop buddy, he silently disables AntiVirus tools and install malware to make sure users don’t notice. Attempts at uninstalling him by moving his progam to the recycle bin and emptying it has been rendered as usless as he can magically install himself. He is capable of installing 10 types of malware at once.

He also has two forms. In his “stalker“ form, he moves freely to different types of computers to stalk his installers.

In his “assasin” form, he tries to kill his installers (electrocuting toasters, using cables, etc.) so he can replace them with his own kind.

Daniel was first created in 2001 when an anonymous hacker was attemping to take over computers, but wasnt able to hack all computers at once. The hacker decided to create a little software that could help him hack into government computers and pirate video games. However, the anonymous hacker was killed by an FBI agent, leaving Daniel alone.

Retrieved from "https://sonicfanon.fandom.com/wiki/Daniel?oldid=1792364"
Community content is available under CC-BY-SA unless otherwise noted.