Start a Wiki
This is an article about Dane the Hedgehog, a character created by Sidewalk Gum on 11/19/2014. 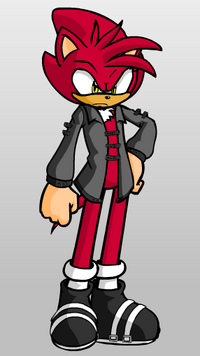 "Humanity does not deserve my forgiveness..."

Dannus Sparks, otherwise known by his alias - Dane - is a red Hedgehog genius, and leader of Team Animus. He was born in Monarch City

Dane has three red quills that stick up at the back of his head, with large yellow eyes. He also has a black jacket with loose strings attaching it together. He has a white tuff of fur in his chest area, and small Black shoes with two buckles connected. Three hairs also stick out abve his eyes, and he has normal hedgehog-like ears.

Dane is very eccentric yet maniacle. Instead of acting boastful and outlandish, he keeps a serene yet stern tone. He enjoys reading peacefully, but is a born leader, and will take command if necessary. He does not rely on others, and tended to be a loner after he ran away from home, he has warmed up to company. However, he will usually follow his gut and keeps things to himself.

Dane grew up as "Dannus Sparks", a small, shy boy. He was born in the country lifestyle of End Forest, and lived in a small cabin with his brother, father, sister, and mother. During his childhood he was often neglected, being the youngest of the group. His siblings would enjoy annoying him and his parents where too busy to interact with any of their children, thus at 13, he ran away. He arrived in Monarch City where he did travelling acts in the sewers for cash, until he was 15 and was able to find a job. With his collected money he went to the cheepest college he could afford, before gaining a scholarship to a far better school - and majoring in a degree of engineering, as he developed a love for technology.

Soon after, however, his house burned down in a mysterious fire and was scammed of all his money, he once again lived on the streets, and was treated poorly. After sneaking into a G.U.N. labaratory in search of food, he uncovered projects by GUN to stop all threats of upcoming technology, and in a fit of rage after learning that they had burned his home, set the place on fire. He worked his way up by stealing and scamming, before gathering his own lab, in which he vowed to destroy all the rich and powerful, and lead the world to chaos.

During this time he met  french rabbit named Malice Masson, who joined Dane in pursuit of the very same thing, eventually being the first one to assemble Team Animus, and led most activities. He and Malice soon developed a close bond, before falling in love. The relationship is kept secret from most of Dane's troops, however.

Soon enough he created Gray Sonic the Metallic as a robot in the Metallic Series he was developing, who later became the third member of Team Animus.

Dane was the creator of the Metallic series of robots, these consist of:

Dane is extremely intelligent, and has a nack for building bots. His expertise comes in enginerring, math, and is very skilled in the art of reprograming and hacking.

Dane is very weak when he fights on his own, and cannot keep stable ground. He also gets over determined of his goals to the point of insanity, and can't stand the thought of one slip-up.

Retrieved from "https://sonicfanon.fandom.com/wiki/Dane_the_Hedgehog?oldid=1556985"
Community content is available under CC-BY-SA unless otherwise noted.