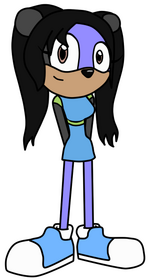 Dana the Panda is an original, anthropomorphic Giant Panda created by pumpituppartyzone. Her best friend is Twila Mouse and she has a crush on Shawn the Bandicoot. The three of them are in Team Bandicoot.

Dana is extremly shy. She usually does not talk a lot, but when she does, people always listen. They listen because of how rare it is that she talks. She also rarely smiles, but usually does whatever people tell her. She does not like to participate in activities that she is important in, and hates when there is pressure on her shoulders.

Many of Dana's abilities are unknown, due to the fact that she does not use them often. However, her revealed abilites are known to be quite powerful. One of them is the Giant Claw, in which Dana inflates her clove and scratches her opponent, severely damagin them. Another known attack is the Panda Cut, which is an uppercut. Dana can also run fairly fast, about the speed of Tikal the Echidna. She is very good at bloking attacks, and can do a helicopter-spin with her pigtails. She also has a mirror that can reflect attacks to make them affect her enemies.

Dana is one of the team captains in this game. Her team name is "Panda Modium", her special throw is the "Stratch Ball", and her special swing is the "Claw Swing". Her default team is the "Bandit Coots."

Maxie and Cliff planned to go on a double date with Sadie and Kaiko (though Kaiko and Sadie weren't really dating). Shawn found out about this, and asked Dana to go with them to get Maxie jealous. Dana agreed and they went to the theatre. Everything that Cliff did to Maxie, Shawn did to Dana. However, Shawn kissed Dana, they saw that she had a smirk on her face. The whole theatre gasped. Shawn wanted to see what Dana would look like with a complete smile on her face, so he made out with her. For the rest of the movie, they were making out and everybody else was watching. Dana may have a crush on Shawn, but Shawn won't admit whether he likes her or not.

Twila Mouse is a default character on the team "Bandit Coots" in Baseball Party Zone, as well as Dana. Twila is always very nice to Dana, mostly to hear her talk, though she sometimes will get on Dana's nerves. Because of how hyper Twila is, Dana tends to ignore her most of the time until she calms down.

Dana as a sprite. DRAWN OVER WAVE THE SWALLOW 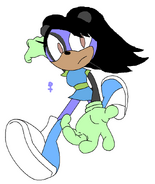 Dana colored in a Sonic Colors base 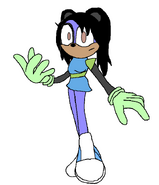 Dana colored in a Blaze the Cat SRZG base 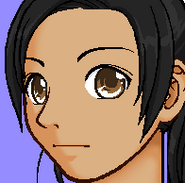 Dana in anime. Made at http://foxrichards.devianta

Dana and Shawn with their extreme gear (bases used) 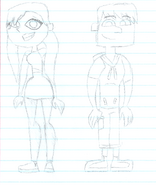 A sketch of Dana and Rory as humans

"We're ready to go any time." - When Team Blast is achieved

"Thank you for trying." - After Winning Race/Battle 1

"Wow! I must be powerful!" - After hitting a home run

Retrieved from "https://sonicfanon.fandom.com/wiki/Dana_the_Panda?oldid=1393551"
Community content is available under CC-BY-SA unless otherwise noted.