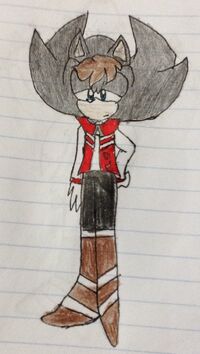 Damon the Hedgehog is an ash grey hedgehog who is of averag height and weight. He has a light peach muzzle, snow white chest fur, and dark grey arms the color of his fur. His ears are tipped in white and are a pale peach on the inside. He has quills that are styled upwa like Shadow's, although the top two are pointed more up and at an angle similar to a triangle. He has cyan blue eyes and a deep red scar that runs across his left eye.

Damon wears a red jacket with white sleeves, the jacket styled like a sports jacket. Damons initials are on his left bottom of the jacket, and two white stripes that are patterned near the middle and are angled slightly. He wears black tights and brown boots with red stopes.

Damon is an emotionless teenager. He is often frowning or has a blank expression. He is very cold and cruel, and will kill when it helps him to get to his goal, though he doesn't want to as much as Anaxarete. He also is very manipulative and tries to use others to his advantage if he can.

Damon is also very naïve, as he still had hoped that his mother loved him even though she often ignored him. He also is willing to do anything for her, and still loves her even though she abandons him regularly.

Damon is quick to anger and has a very bad temper. He is also very egotistical and believes that he is better than everyon. Because of those two characteristics, they make him easy to distract and fight.

Damon was born prior to Sapphira, and is the son of Anaxarete and Jabez. His father died a few months later after being sent to war. That led his mother to go mad, and that often left him alone. His mother was so power hungry and goal driven to kill the royal family that Damon was often ignored or even abandoned. Even after all this, he remained loyal to his mother, believing that if he could help her with her goals she would pay attention to him. Although he was never physically harmed, he lost some of his sanity when he was ignored or abandoned.

After the assassination of the King and Queen, his mother started to pay attention to the eleven year old Damon. She manipulated him to pretend to fall in love with Sapphira so he could then gain her trust and kill her when the time was right. She promised that he would get the crown when he did his duty. He agreed to the plan, eager to win his mothers affection. They proceeded with the plan four years later to not arouse suspicion.

Unfortunately, that plan eventually led to his untimely death. Five years later, at the age of sixteen, he had captured Sapphira's heart and they were planned to be engaged. While on a stroll in the woods with the young princess, he saw that this was the perfect moment to strike and kill her. He then attacked her while she was smelling a rose, impaling her with a shadow attack. A fatal mistake. Sapphira healed instantly and attacked Damon, while Damon eventually revealed that he never loved her, which only enraged her even more, to the point where she ended up murdering him. His last words eventually made Sapphira commit suicide.

He is only seen during flashbacks and occasionally in Sapphire's dreams. He drove Sapphira to nearly madness and caused Anaxarete to stab Sapphire, even though she had implied that she was going to kill him anyway should her plans have worked.

Like his mother, he is able to control shadows, though he is able to foca them into attacks. He also has some pyrokinetic abilities that are stronger than his mothers. He can also use shadows to enable him to be stealthy and sneaky. His fire abilities allo him to make fireballs and larger flames to burn his foes with.

Damon has very good eyesight and can see in the dark. He can also hear things far away, a variation of supersonic hearing.

Damon is able to preform some ability of gym and has flexibility. He also can preform hand to hand combat and is able to defend himself fairly well. He also is able to hear above average.

Damon is very naïve, believing that his mother still loved her even though she abandoned and ignored her. He also is very egotistical and easy to anger, making him brash and that led to his death.

Retrieved from "https://sonicfanon.fandom.com/wiki/Damon_the_Hedgehog?oldid=1826214"
Community content is available under CC-BY-SA unless otherwise noted.