Yes! I finally got the perfect gift for Max!

Dawn Wendy the Rabbit is an original, Citrine, anthropomorphic, mobian-toon rabbit created by Pumpituppartyzone. She is 93 cm tall and she keeps her weight a secret. Her step-sister is Freckles Jeeperchomp and she is the speed member of Team Freckles. Her best friend and bodyguard is Big Buela the Gorilla, and she has a crush on Max Flippercorn, but she doesn't know that he knows about it.

At first, D.W. was Freckles' good fraternal twin. She was 15 years old, had Yellow-Green fur and hair, a Lime Green spot over her right eye. She had an orange hoodie with jean pants. She was also Cliff McMuffin's girlfriend. She was aligned as a hero, and was friends with almost all of the toon-mobians. She was exteremely friendly, despite her sister being so evil. She has a problem with sleepwalking, however, and once walked right into the back of a cement truck and was stuck in the cement until Cliff came and saved her. D.W.'s look has not changed much, but her personality has changed slightly.

D.W. is a very responsible person. She is the most responsible and closest to good on Team Freckles. She does not necessarily like Freckles and Ned, but they forced her to join their team. D.W. does not completely dislike Ned and Freckles, but is not very fond of them. She likes to do things for Max and help him, but things usually don't work out her way. She likes to skate, especially with extreme gear. She hates when she sleep walks, even though it does happen often.

D.W. has a lot of normal moves, but some that she made up on her own. For instance, she can do many spin attacks, such as Spin Jump, Spin Kick, Spin Punch, and Spin Dash. She also can also do rabbit only moves, such as Bunny Hop, Bunny Kick, Bunny Slap, and Bunny Bomb. She also has a trap attack similar to Rouge the Bat's, called the Ring Bomb. She tosses a fake bomb that is set off when somebody touches it. She can also enter other peoples' dreams as she sleeps, but because she does this unconsciously, she does not know of this power.

D.W. has a big crush on Max. She tries to make it subtle about it, but Max knows that she likes him. She tries to make the most interaction with Max that she can. She teams up with Max and Jake the Wolf at times as an extreme gear team. They race each other, train with each other - they do many things with ecahother.

D.W., Jake, and Max were all trying to find a video game. D.W. and Jake were trying to find it for Max, and Max was trying to get it for himself. After fighting over the game, they all became very good friends. They race and train together, and D.W. likes to hang out with Max and Jake to get away from the evil of Freckles and Ned.

D.W. and Freckles are sisters. Freckles forces them to be close, by making her join her team and hang out with her. D.W. strongly dislikes Freckles, but will not admit it, in the case of Freckles attacking her. 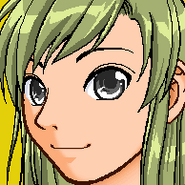 D.W. in anime. Made at http://foxrichards.devianta 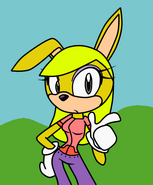 Dawn saying no to something. (Base used)

D.W.'s previous design
Add a photo to this gallery

"Okay, any time, I'm ready to go." - When Team Blast is achieved

"Oh my goodness! That was amazing!" - S Rank

"Oh wow. That was deffinatley not my best work." - E Rank

"Aww. I know I could have won." - After Losing Race/Battle 1

"Oh, great. Freckles is gonna kill me." - After Losing Race/Battle 2

"Have you know shame?" - After being 'Killed'

Retrieved from "https://sonicfanon.fandom.com/wiki/D.W._the_Rabbit?oldid=1408993"
Community content is available under CC-BY-SA unless otherwise noted.