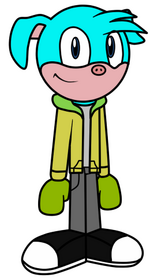 Cyan the Pig is an original, Cyan, anthropomorphic, Domestic Pig created by Pumpituppartyzone. He is 88 cm tall and weighs 20 kg and his little sister is Raven the Pig. He works at the Total Whining News Station, and usually partners up with Siegfried the Wolchidna and Petunia the Porcupine for stories. He has a blog and a vlog, and both are pretty popular.

Cyan was assumed to be created in 2008, but this is not for sure. This is only assumed because 2008 was the same year that Pigs came out in Toontown Online. He was originally 15 years old and was dating Raven. He was considered tough, and was just as obsessed with money as Raven was. He wore basically the same things he wears now, except his gloves were white and his tank top was ripped. He didn't like Sonic very much. Also, he was originally a dull brownish color, instead of actually being cyan.

Cyan is usually pretty nice. However, when he is in a competition or is getting a scoop, he can sometimes be rude because of his extreme concentration. However, he is a surprisingly good sport and is never angry when losing a competition. He has an unusual obsession with coffee, or really caffine in general. Cyan always has at least 5 cups of coffee a day, which worries his parents, though they do nothing about it in fear of withdrawl symptoms. For some reason, the caffine never really effects Cyan in any way. He is calm and rational unless he's looking for something to tape, blog, or vlog. He can be pretty sympathetic and gullable at times, similar to Knuckles.

Because of his success with his vlog and blog, Cyan can easily make something or somebody popular, but doesn't take bribes. He is also a master at getting things on video, no matter what it takes. He shares this skill with Siegfried, though he stopped filming things for the most part when the two met, instead forcing Siegfried to do so for him. Though he does not have any special skills besides the common Super Speed most Sonic Characters possess, he can also slide a long way on his stomach, back, hands, and his bottom; he uses this ability to get things on tape. He throws weak punches, but is great at dodging things. He also has a dud camera that he can rig to explode at any time.

Cyan's a member of the "Egg McMuffins", and is a balance type character.

Cyan's second design on the computer (Drawn on paper first) 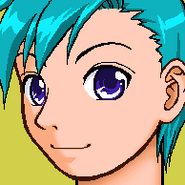 Cyan in anime. Made at http://foxrichards.deviantart.com/art/FaceMaker-52755515

Cyan, Siegfried, and Petunia
Add a photo to this gallery

"I'm impressed with myself." - A Rank

Retrieved from "https://sonicfanon.fandom.com/wiki/Cyan_the_Pig?oldid=1690256"
Community content is available under CC-BY-SA unless otherwise noted.