This page is created by LOLMAROFL Sanctuary.

Cuoleputure the Pheonolf is a hybrid of a Pheonix and a Wolf. Cuoleputure is from the past 2000+ years ago, but was forced to be underground for the next following years.

Being the Only Pheonix hybrid breed left, He has a rock hard attitude. He dislikes having people bug him into doing things he does not like, but he is capable of handling children and Pre-teens. (for some reason, Children enjoy his incredibly soft fur) Cuoleputure is an uneasy Mobian to handle, and goes all-out when It comes to fights.

Although he wasn't usually like this before he came from the past. Before, He was a nice, immature little puff-ball. As seeing his fate changed dramatically, he now doesn't seem to enjoy life as much as he used to. He now spends his time alone (or with he closest friends) and seen protecting the ones he most cares about.

Cuoleputure has a regular feature as a normal wolf, but he has the abilities and parts of a Pheonix. Cuoleputure's fur is Black with a mix of White, Red, Orange, and Golden Yellow all combined. His Muzzle and skin are White, and His eyes are Yellow. His eyes are also a bit Reptilian-like, Which mostly scares some people. His wing's are about 10 feet of length, and 12 feet of height.

Not much clothing on him, Except his new White Gloves with an Aqua Blue gem at the arm part, and Grey/White metal boots with a light blue arrow-like symbol going down. At the top of his boots are the same as his gloves, an aqua blue gem.

Cuoleputure was never a regular child when young, He was hatched from a weird looking mother, Different from the others. He too became the species of his mother, embarrassed to show his wolf side to the other Birds. Cuoleputure was always naive, always got in trouble whenever no one was there to help. Until the day, Of course, the Sandigoa's and Shahongai began they're thousand year war. All Changed for everyone, but mostly for Cuoleputure.

The war lasted for about one thousand years, Never a break. Everything changed, conflicts started happening with the tribes, the people were so violent, you couldn't Imagine the sight. That's when Cuoleputure was 7 years old, and frightened to death. His Mother quickly took him underground where they had made a capsule for him, because she knew that she wouldn't make it with him nor the others. Giving her son a kiss on the cheek and a hug, She slowly placed Cuoleputure in the capsule, Cuoleputure asking impatiently why she was doing so. His mother only said he would have a long sleep here, Where she would be guarding. As much as he loved his mother and family, He quickly obeyed and allowed her to continue, shedding longing tears.

Once sealed, He stayed there, motionless. Without food nor water, He slowly watched his mother and family look down at him, as if he was dead. Cuoleputure tried his best to pry himself out, but without avail. He wept and cried all day, all night. Wishing for this nightmare to end.

Until about 10 years later, they discovered this underground home. The Shahongai thought this was a Sandigoa base. They quickly killed Everyone of Cuoleputure's family, Not even letting him see or even hear what went wrong. That day was the last of his mother, and the end of his species.

After two thousand years of being sealed in a capsule for many years, Masamba Tichaona suddenly appeared, already escaped from his capsule. Masamba quickly spotted Cuoleputure's capsule, quickly trying to pry it open. Which he successfully did, He shook Cuoleputure with joy, Knowing someone else was a survivor from the two thousand year imprison. Cuoleputure awakened, Without any emotion from his heart. He gave a deathly stare at Masamba, then quickly realized he was another capsule survivor. That's when he broke his gaze and looked around, seeing dried up corpse's and dusty bones, he then realized his family was murdered, and quickly began to weep. Masamba quickly cheered him up, promising he'd be the only family Cuoleputure would need. Cuoleputure put his tears to a stop, finally manning up as he opened his wings with self-confidence. He then promised to guard Masamba and anyone else who came across his soon to be found family.

Both finally came out from the ground, looking into the bright sun and surrounding. Cuoleputure suddenly covered his eyes with his gigantic wings, the sting of the light blinding him. He then cam immune to it, and suddenly felt peace in the place. Masamba was a bit of an idiot when they walked around for directions, Because he had no Idea where they were going. Cuoleputure finally put a stop to his idiotism and instead had an idea to soar the sky to see new land, Masamba felt dumb and agreed, Cuoleputure giving him one of those "Smartypant's" look.

Cuoleputure Grabbed Masamba's shoulders and flew in an instant. Masamba (not knowing he had his own wings) clearly felt as if his skin was gonna fall off, held on tightly to him. Once they were at birds-eye view, they were astonished from the sight, Letting out a loud "wow" from the beautiful new, renovated land called Mobius.

Note: Not finished, But soon will be...

Cuoleputure has the abilitie to control Fire through Physic force, which is known as Pyrokinetics. He get's this from the time he was little, his kind used to be known as the "hot" part of the Noble Clans. Cuoleputure, Being able to have Pryokinetics, also has a special abilitie not many of his kind have. Cuoleputure is also able to use his Wings to Fly to great speeds and to high ranges. This makes him even more powerful, because it gives him the chance to swoop down at his opponents, hit them from a height in the sky, or surprise them by literally pulverizing them. These are his main abilities he uses.

Despite not able to wield a knife or a gun, Cuoleputure is able to Hold a Sword, though he is not in perfection. Being Middle-class swordsman, He is able to transform with his sword, giving him related super form powers.

The only person he actually can trust, He has built a huge, unbreakable bond with this Cusimance. From the beginning, He knew he could put his trust in him. Masamba made him who he is now, Re-shaped his personality from being a mommas boy into a brave, hard rocked Bird Wolf. He will stand by Masamba's side always, and his new companions he has made.

Being one of the only people Cuoleputure, Both Selenia and Cuoleputure seem to have a pretty close relationship. Sometimes shown to have a little interest. But of the most part, Cuoleputure looks at Selenia as if she was the Sister he had lost, protecting her at all costs. It's unknown to Selenia if she had some feelings for him, but it is a certain fact that Selenia views him as her brother. Over-all, It might be possible if Cuoleputure becomes adopted into Selenia's family.

Unknowing if Ryoichi and Cuoleputure are friends, it is a quite confusing friendship. Since Back then, Ryoichi and Cuoleputure's clans were at war with each other, including the Shahongai. Both didn't know each other at the time, but it would be a fact that if they were to meet in their pasts, they would be sworn enemies. Cuoleputure, Not letting go of his beloved past, Views Ryoichi as a Rival/Allie, Since they make a good fight team, and because of Cuoleputure's friends being Ryoichi's as well. In the end, it might be a possible friend-friend relationship.

Seeing her as a friend only, Both have a strong relationship. Ever since Cuoleputure stumbled upon her around the Green Hill Zone, He has seen the power and strength thid young girl has. As they became close friends, Sanalita has found feelings for him, but only keeping it secret. Soon as they became adventure friends, Cuoleputure asked if she wanted to be his companion, as to she agreed. Now, their Friendship grows stronger and stronger.

Bringing harsh memories to Cuoleputure, The Shahongai is the one thing he hates in his whole entire life. Training to become stronger and stronger, He tries his best to try and wipe out the whole entire clan (Although, it is completely impossible). Shiazir, being the leader of the Clan, is always playing mind tricks on him, Causing him to break down in a heart-broken way. As a result, this turns Cuoleputure angered, which causes him not to be seen in a few days. Of course, he would always pull up from the corner.

As the Hatred of Cuoleputure continues to grow on this clan, it is seen that He is enemies with the Shahongai.

Strangely, Cuoleputure has recently found a small, blue kitten. Even though he doesn't seem to care for it at all. It is shown that he has adopted this pet, though. From the tag of its collar saying Aimie Chica. It is unknown if he's still has this kitten.

all, the kitten follows him as if his pet.

"Do you know what it's like to lose everything you cared about...?" - Talking to Ryoichi.

"All I know is that I am alive and that you are my enemie...so if my clan was to kill every Sandigoa species out there, I would do it. For my pride, for my honor." - To Ryoichi, Before Selenia runs away upset.

"I'm sorry, I didn't take control over my language...I didn't mean to harm you're species as well." - Apologizing to Selenia.

"What happened here? Why are you crying, girl?" - To Sanalita when they first encountered.

"To tell the truth, I have no one to trust, no one to love, no one to care for...what use is there for me in this time...?" - Talking Privately to Selenia and Masamba.

"If you were to Disappear tomorrow, without no trace, who would be the only person you would tell it to?"

"You can choose to be happy or sad and whichever you choose that is what you get. No one is really responsible to make someone else happy, no matter what most people have been taught and accept as true"

"I think I'd do better on my own, no friends, no fights,just me alone"

"It's getting colder now and the darkness consumes me. Depression is slowly creeping up. Maybe one day you'll actually care about me. "

"It's just one of those days Where I just want to disappear, To get away from everything, Because I hate my life here. Dying seems less sad than having lived too little." 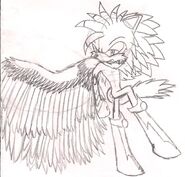