Crystal the Lycanroc is a character appearing in The Legend of Fox the Brave. She is a young Shiny Dusk Lycanroc who lost her family to the Destructix just prior to the Storming Alliance's attempt to rescue the kidnapped jackal cub Stormy, and as a result, has a strong dislike for both the Destructix and Lycus' Gang. She was confirmed to have foresight, and was taught by Boulder the Lycanroc, who has foresight himself. 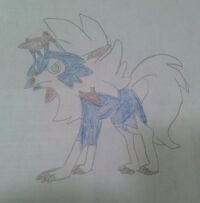 Crystal is a Dusk Lycanroc like Boulder, Dawn, Sunny, and Crunch, but she is a Shiny. Being a Shiny, she has deep blue fur instead of orange, and paler, more bluish-green eyes similar in color to Monty's, though when she gets angry, they glow the same red as a regular Dusk Lycanroc's.

Crystal is a cool, calm, and collected person. She has a deep love of her family, and carried this over to her Team when she joined the Storm Fighters. As a result of her love of her family, she has a strong hatred toward both the Destructix and Lycus' Gang for destroying her family, specifically toward Scourge for chasing her when she fled. She initially had feelings toward Boulder, but this faded when she realized they couldn't be together(Boulder was too old, and already had a mate), and now simply respects his status as deputy and her mentor.

Before the Series: Crystal's past is largely unknown. She briefly reveals that her family lived peacefully on Angel Island, but after the jackal cub Stormy was kidnapped, her family was attacked, and Crystal was forced to flee, never seeing them again. Furious at her attackers, she took the opportunity to retaliate against them when Scourge fought Boulder as the Alliance were rescuing Stormy. She revealed that she had been having visions of the warriors and the people who attacked her family prior to the actual incident, leading Boulder to suspect she has foresight(which the creator confirms she does).

Crystal's moveset is currently unrevealed in the series, but it was confirmed she knows Crunch, Stone Edge, Accelerock, and Thunder Fang.

Crystal's Ability is Tough Claws, which powers up attacks that make contact.

Crystal is a loyal Storm Fighter and former apprentice of Boulder's, having learned how to interpret her visions and dreams from him. She became an unofficial deputy during End of the Worlds, after Sunny was infected by the Metal Virus

The pair were first shown to be close friends, and it was later confirmed by the author that they were in love, making them LGBT

Due to the Destructix and Lycus' Gang's involvement in the destruction of her family, Crystal has a vehement hatred for both groups. She especially hates Scourge for the fact he chased her after she fled. She soon ended up tearing his ear in a fight, leaving him with a notch in it(Boulder had done the same earlier, but on the other ear).

Crystal is tied with Sunny as the second confirmed LGBT character, after Lucas and Finnick, who are both first

Crystal is the first LGBT POV of the series, and the first recurring female POV

Crystal is the first Shiny Pokemon POV, with Skye becoming the second in a currently-untitled installment.

Retrieved from "https://sonicfanon.fandom.com/wiki/Crystal_the_Lycanroc?oldid=1861037"
Community content is available under CC-BY-SA unless otherwise noted.