Start a Wiki
This is an article about Crystal the Ice Vixen, a character created by Nikki-Kaji. 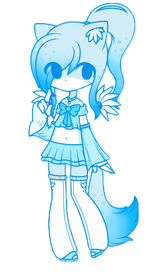 Crystal the Ice Vixen is a character that is planned to make an appearance in Tales of Mobius. She is an anthropomorphic fox gifted with Cryokinesis, also known as the power to create and manipulate ice. Born and raised in Holoska, Crystal is one of the few Mobians in her region.

Crystal is a female ice vixen with different mixtures of blue and light blue fur. She also has white patches of skin on her stomach, arms, and muzzle. The fur in her ears is also white. Crystal's eyes are a darker shade of blue than her fur. She also has small ice wings that float at her shoulders, six crystals on each wing.

Usually, Crystal wears a light blue, off-the-shoulder crop top with ruffles and a slightly darker colored bow attached to the front of it. She has transparent slip-on sleeves with a light blue tint to them, and on the inside are made out of a silky material that go over Crystal’s arms to ensure that the sleeves do not fall off, which are cut at the tips of her fingers. She also wears a two layered short, baby blue ruffled skirt and white boots that go a little past her knees, with hearts on each side of them, and a pinkish-blue buckle at the top of them. Finally, she wears a necklace with a small crystal attached to it.

Crystal has lived in Holoska every since she was a little girl. When she was not old enough to take care of herself, Crystal was taken care of by Jari-Thure, the son of the village elders, and his wife, Sarianna. At this point in time, Marketa, their daughter, was only a toddler. Sometimes while Jari-Thure and Sarianna were busy, Crystal and Marketa would hang out together, going sleighing and having snowball fights and such.

Crystal wasn't allowed to stay in the house often, due to the fact that her presence would make the entire home cold. However, this did not upset her much, as she knew that she couldn't completely understand her powers yet. Besides, she liked being out in the cold much more than being cramped up in an house by the fireplace. So, she built her own igloo, and even let some of the villagers help her with decorating.

Crystal is very kind and loving, always helping those in need whenever she can. Though, whenever she does mess things up, she tries to make it up to whoever she hurt. Sometimes she tries to do things for others even though they don't exactly want to be helped. Crystal may sometimes even misunderstand someone when they say something, or try to do something that is out of her capabilities. But in the end, she always tries to learn from her mistakes after realizing what she has done wrong.

Crystal is a cryokinetic, meaning that she is able to form, manipulate, and control ice. Though she does not use her powers often, Crystal is able to control them with ease after getting help for her village elders. Sometimes, she must protect her friends and family from danger, meaning that they are a huge help when necessary. Due to living in such a cold climate, Crystal's ice powers are increased and she is able to become very powerful.

Along with able to create and manipulate ice, Crystal has the ability to freeze whatever she comes in contact with. For example, if she were to step foot on water, it would immediately freeze, and she could run in any direction without fear of falling in. In extreme cases, Crystal is able to inflict frostbite onto anyone or anything. This is when their flesh and tissues can be turned to solid ice, and then shattered. Crystal has never done this to any living person before, but has done it to several of Eggman's robots, causing them to turn completely into ice and then break.

Also, Crystal's ice powers are able to protect her from the cold. She can withstand almost any low temperature, even if they are in the negatives. To a certain degree, she can even keep herself cold in warm areas, but if it gets too hot, this will not work. If there is a fire surrounding her, Crystal's ice will evaporate due to there being low moisture in the air. After staying in a really hot climate for too long, Crystal must either return to a cold area or consume something cold in order for her powers to return to normal.

Knitting is something that Crystal has had interest in since she was much younger. Though she does not mind the harsh cold of Holoska, Crystal loves to knit things like sweaters and mittens for the citizens there who need them. At first, she wasn't very good at it, often getting clothes sizes wrong, or tying sweater sleeves together. But as time went on, knitting became a very funny hobby for her, and was very enjoyable. Crystal soon began making clothing for everyone in her village, sometimes through request and other times as a gift. Once, she even knitted a doll for Marketa's 13th birthday.

Snowboarding is just one of the many fun activities that are done on Holoska, but this certain sport caught Crystal's interest the most. Her and Marketa would sometimes go snowboarding together along with the other kids, and it became a fun sport to partake in. Whenever she has free-time, and decides not to sew anything, Crystal grabs her snowboard and heads for the snowiest, highest mountain she can find.

Retrieved from "https://sonicfanon.fandom.com/wiki/Crystal_the_Ice_Vixen?oldid=1647821"
Community content is available under CC-BY-SA unless otherwise noted.