Blue wolf, slightly shorter than Sonic. Wears white, fingerless gloves. The rings of his gauntlets are filled with purple crystal whos crystalline structure constantly changes. The streaks on his fur are light blue. He has a plume of chest fur that wraps around his neck like a scarf. He has teal eyes and is often found smiling. 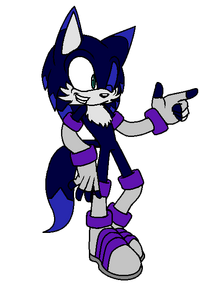 Normally happy, though put into a blind rage if angered. He tends to act rather flamboyantly. He's quick to help those with their problems, emotional or otherwise.

Cryokinesis. He has the ability to manipulate the minerals in the ground to create crystals and control them.

Cryos is a bit faster than Knuckles, being able to push himself hard enough to leave him a good distance behind.

By utilizing the Chaos emeralds, he can create a fairly powerful blast of energy focused through the crystal. This takes quite a bit of energy and usually leaves him exhausted if used in excess or in a very large burst.

Super Cryos: Achieved by collecting all seven Chaos Emeralds. This form gives him heightened physical abilities; increasing his speed and strength. However, it decreases the speed in which he can manipulate crystal.

Kidnapped along with his twin brother during a hiking trip with their parents. They were taken to and experimented on in the same facility as the other characters from Project Element. After escaping when the freedom fighters destroyed the lab, Cyos was airlifted from the area. Unfortunately, the helicopter that had picked him up suffered extreme turbulance. Cryos and one other inmate fell onto a mineral rich island in the middle of the ocean. They spent quite a few years there, the other inmate taught Cryos all the skills that he knows, besides how to control his powers. The vast amounts of minerals located on the island made it the perfect place to practice his powers. The area was so mineral enriched that crystals grew everywhere, the plants and animals even had crystal like adaptations.

He liked his mother a lot, but wasn't very fond of his father because he was a sports freak and never spent any time with his son. He has a twin brother named Purple. They were separated when thay got kidnapped and taken to the labs to be put in project element.

Close friends. They've known each other since the facility.

Cryos would like to get back at him for what he did.

Retrieved from "https://sonicfanon.fandom.com/wiki/Cryos_the_Wolf?oldid=1810996"
Community content is available under CC-BY-SA unless otherwise noted.