Me, a pyromaniac? C'mon, that isn't fair to say; not all of my explosives are fire-based! 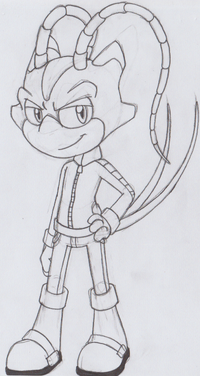 Cruz the Cricket is a member of the Soumerca Egg Army, and serves under Soumerca Sub-Boss Avalaine the Eagle of the Jade Fortress Egg Base.

An averagely-built cricket who stands a fair bit over three feet tall, Cruz has a short muzzle with no visible nose, horn-like extensions and two long, slender antenna on his head, and two long, slender, tail-like cerci. He also has translucent wings that are typically hidden.

His skin is primarily olivine in color, with a pale goldenrod muzzle, chest, and stomach, as well as #3 olive drab markings on his head, back, and shoulders. He has no hair on his head, and his eyes are puce in color.

His outfit consists of an American purple long-sleeve top with a thick white collar, white stripes down the sleeves, and a zipper down the front, as well as white gloves, black pants, and American purple boots with white cuffs.

While Cruz is trained in the art of hand-to-hand combat, his true prowess lies in his knowledge of explosives; not only does he know how to use them well in a fight, he even knows how to make them himself. His favorite type of explosives to use are different kinds of Energy Bombs, fitted with various Elemental Cores (such as Algidite, Solasite, etc.); primarily, he uses Energy Bombs that are basically grenades, and ones that function more like proximity mines. He does carry a laser rifle with him as a backup weapon (as is standard-issue for all Egg Soldiers), but he's not particularly skilled with it.

Being a cricket, Cruz has powerful legs for both jumping and kicking; his legs are the strongest part of his body, and he can not only shatter stone with one solid kick, he can jump up to seven feet into the air and fifteen feet ahead. The muscles and nerves of his legs are specialized in such a way that he can sense vibrations in the earth through them, and the Cybernetic enhancements to these nerves amplified this natural power; it's enhanced even further if he tenses his leg muscles by crouching.

Cruz does have wings, but they're not strong enough to allow for sustained flight; however, he can use them to travel even further with his jumps by using them to glide, and he can also hover for short periods of time (roughly for five minutes).

Cruz has no specific resistances to any Elements or energy-types. He is quite fast, and can easily outpace slower foes and evade their attacks.

Cruz has no specific weaknesses to any Elements or energy-types. His defenses aren't anything special, therefore he mostly relies on his agility to try and evade potentially devastating attacks. His cockiness often causes him to underestimate his opponents.

Cruz is often described as loud and impatient, and doesn't like having to sit still for long periods of time. He has a bad habit of exaggerating any positive accomplishments of his, and is rather cocky as well, to the point where he tends to underestimate his opponents.

He's a bit of a jokester, and is rarely all that serious, even when the situation calls for it. He is brave, however, and will gladly jump into a fight if he needs to.

Retrieved from "https://sonicfanon.fandom.com/wiki/Cruz_the_Cricket?oldid=1861484"
Community content is available under CC-BY-SA unless otherwise noted.