It was Skye's idea to follow you. I didn't want to, but I couldn't turn her down. Heh

Crunch the Lycanroc, formerly known as Pebble, is a character who appears in The Legend of Fox the Brave. He is a large male Dusk Lycanroc, described as "the Redpelt of Lycanroc" by Boulder, for his vicious temper and fierce loyalty to what he believes in. He made his first appearance in The Dusk Wolf, and became a regularly recurring character afterward. 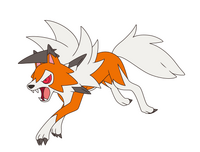 Crunch is a large male Dusk Lycanroc. He is noticeable larger than Boulder, and only has a scar on his chest from an unknown battle he took part in prior to meeting Boulder

Upon his first appearance, Crunch came off as pushy, arrogant, and extremely aggressive, especially towards Boulder. However, as time went on, he warmed up toward Boulder. He became a more caring person, though maintained his arrogance and vicious temper. He was described by Boulder as "the Redpelt of Lycanroc".

Before the Series: Crunch-then known as Pebble-and his sister Dawn were brown to a female Midday Lycanroc in the Akala Sun Pack and a male Midnight Lycanroc who happened to be the leader of the Akala Moon Pack. A great battle broke out over them, leading to the death of their mother and their leader giving them up. Furious at this, Pebble ran off with his sister, and they soon learned about Dusk Lycanroc. Pebble was the first to evolve into it, choosing to change his name to Crunch.

The Dusk Wolf: Crunch is seen among a Pack of wild Lycanroc Boulder meets in Downunda while investigating the strange visions he'd been having since a massive battle with the Iron Dominion. When his sister Dawn decides to leave with Boulder to help him on his quest, Crunch insists on coming too, not wanting to leave her alone. Crunch continuously makes trouble for Boulder before finally betraying him to Lycus' gang. Angry at him, Dawn tells him to leave, practically chasing him away. Later on, Boulder meets him again in Mystic Ruins, with a Shiny Midday Lycanroc named Skye, who hails from Alola as well. When Lycus' gang attacks again, Crunch helps to drive them off. Later, after the big battle up on Angel Island, Crunch helps Boulder to get down, but when Boulder, Braveheart, Dawn, and Sunny leave to follow Dark Enerjak, Crunch decides to stay

Looming Darkness: Crunch appears when Boulder is battling Mephiles in Dusty Desert. He uses Crush Claw to destroy a ball of energy that is flying toward Boulder. After that he engages several of Mephiles' monsters before Mephiles himself disappears, granting the warriors a chance to escape. Crunch supports Boulder outside, but they, Braveheart, and Fin encounter Dark Enerjak, who badly injures all three of them, and kills Fin. The remaining trio barely manage to escape with Team Dark's help. In Soleanna Forest, Boulder thanks Crunch for his help, and Crunch replies it was Skye who convinced him to stop wallowing and help out. When the warriors recover enough to travel, Crunch and Skye accompany them to the Storming Base.

Crunch's Ability is Tough Claws, which boosts the power of attacks that make contact.

Crunch is very stocky and muscular, granting him incredible strength. His favorite move is a back kick, which is where he bucks like a horse and kicks out with both hind paws

Being a Rock-Type, Crunch is weak to Water, Ground, Fighting, and Steel-Type Pokemon 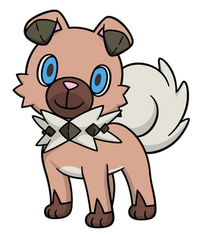 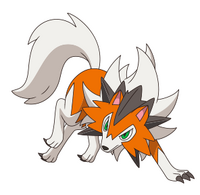 Due to the Rule of the Worlds, Crunch is immune to the Metal Virus, as he is Alola-born

Retrieved from "https://sonicfanon.fandom.com/wiki/Crunch_the_Lycanroc?oldid=1868982"
Community content is available under CC-BY-SA unless otherwise noted.