View source
This is an article about Crimson the Echidna, a character created by Majin Ghidorah on 10/10/2015. 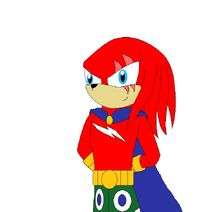 Crimson the Echidna was once an guardian of Angel Island but went rogue. He is usually the antagonist of the deviantart user CyotheLion's and ScottishArtGuy's stories.

He is currently the newest host of Enerjak.

He is an red Echidna with an white lighting bolt on his chest and has blue eyes and peach skin. He wears an green, white and blue clothing with golden cuffs and belt. His hands has white gloves with two blades or knifes on each hand. He also got two scars over his left eye.

After his encounter with Sonic in Eggman's lab during the events when Cyo was brainwashed, he got seriously injured by unstable artificial chaos energy which damaged most of his body. He was upgraded by Anti-Tails and Boomer the walrus and was given a purple armor on his torso with a energy core on the middle. His both hands and forearms were replaced by mechanical ones similar to Cyo but purple and with blue buttons. He also receives a new eye after his previous right one was blinded. On his scalp he got a device to give him enhanced senses. He also wore a blue cape.

After being revived for the first time, he returns to his original look.

After being transformed by the Dino-emeralds through magic, he is turned into a red T.rex with blue eyes.

When Enerjak merges with him, he gets a armor similar to Knuckles but purple and shoulder pads.

Crimson is shown to be very cruel and violent and will destroy anyone who stands in his way. He is also very rude, brutal, selfish, ruthless and is half-insane. He does not care for anyone he works for, even Eggman. He takes great pleasure in tormenting his victims and will never show mercy.

As a child Crimson was very cheerful and playfull but yet had a short temper by throwing tantrums.

Crimson was raised as a fosterbrother to Knuckles and they grew up together. When Knuckles was selected as the guardian of the Master Emerald, Crimson got jealous when Tikal saw he was not worthy to guard it. He then decides to challange Knuckles in a fight and it resulted in Knuckles winning. He was hereafter banished from Angel Island but swore revenge on Knuckles.

Crimson possesses super strength, speed and great amount of stamina. But he's not as strong as Knuckles but he is more lethal with his sharp blades on his fists.

After being converted into a cyborg, he was given abilities similar to Cyo, but with retractable blades.

As a cyborg these abilites are enhanced.

He is an exellent fighter in martial arts and sword fighting. He also is good at fighting those who has superspeed and can deflect a spindash.

He is not completely invulnerable and he can't survive long falls from the sky. His main weakness is being drained off his powers. Being a cyborg he can be weakened by electromagnetic pulses and his mechanical hands being torn off or crushed. His yellow core on his torso can also be drained of power if damaged. 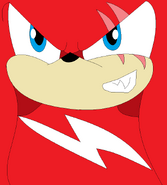 Crimson in his armor 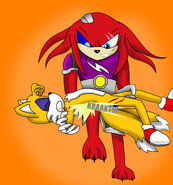 Crimson breaks Tails' back in chapter 11 of Terror of Crimson 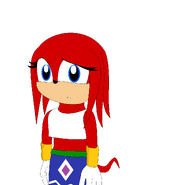 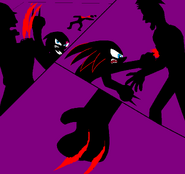 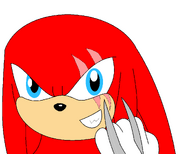 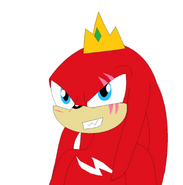 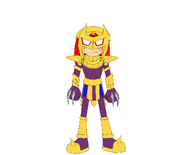 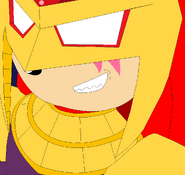